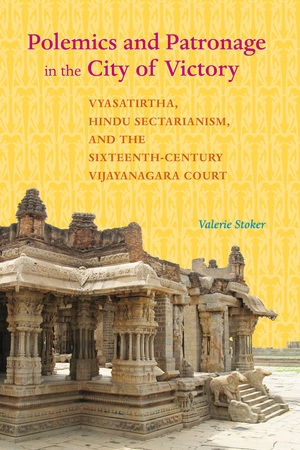 Polemics and Patronage in the City of Victory Vyasatirtha, Hindu Sectarianism, and the Sixteenth-Century Vijayanagara Court

How did the patronage activities of India’s Vijayanagara Empire (c. 1346–1565) influence Hindu sectarian identities? Although the empire has been commonly viewed as a Hindu bulwark against Islamic incursion from the north or as a religiously ecumenical state, Valerie Stoker argues that the Vijayanagara court was selective in its patronage of religious institutions. To understand the dynamic interaction between religious and royal institutions in this period, she focuses on the career of the Hindu intellectual and monastic leader Vyasatirtha. An agent of the state and a powerful religious authority, Vyasatirtha played an important role in expanding the empire’s economic and social networks. By examining his polemics against rival sects in the context of his work for the empire, Stoker provides a remarkably nuanced picture of the relationship between religious identity and sociopolitical reality under Vijayanagara rule.

By Valerie Stoker, author of Polemics and Patronage in the City of Victory: Vyasatirtha, Hindu Sectarianism, and the Sixteenth-Century Vijayanagara Court This guest post is published in conjunction with the Association for …

"A piece of unquestioned expertise. It brings a fresh picture of the statecraft of the Vijayanagara empire—a most puzzling, cosmopolitan South Asian polity—at the peak of its career in the early 16th century. . . . This not only historically but also theoretically informed book is a must-read for those interested in Vijayanagara history or polemics between Dvaita and Advaita schools. It is also an important read for all those sensitive to the problem of finding an appealing language to effectively represent the mutual interdependence of sociopolitical realities, intellectual production and historical thinking."—Reading Religion

“Valerie Stoker’s work, with its insightful analysis of the role played by the Madhva sectarian leader Vyasatirtha in the complex and multifaceted interplay of religion and state patronage in sixteenth-century South India, is a valuable addition to the corpus of writings on Vijayanagara.”—Anila Verghese, author of Religious Traditions at Vijayanagara

“Never have Hindu philosophical debates and sectarian disputes seemed so lively and so relevant to historical dynamics. Drawing on inscriptional and material evidence as well as texts, Stoker provides us with a skillfully drawn picture of the complex interactions among rulers and religious leaders in sixteenth-century South India.”—Leslie C. Orr, Concordia University, Montreal, and author of Donors, Devotees and Daughters of God: Temple Women in Medieval Tamilnadu


“Stoker sets a new standard for the study of religion in early modern South India, recognizing that doctrine does not unfold in a sociopolitical vacuum and providing an insightful account of the relations between sectarian organizations and their political patrons.”—Phillip B. Wagoner, Wesleyan University

“In this engrossing and sophisticated book, Stoker brings together fine narrative fluency, careful scholarship across different disciplines, and critical sympathy for ideas and people from a different time and place. She is especially illuminating on the interaction between historical context, institutional imperatives, and philosophical innovation.”—Chakravarthi Ram-Prasad, author of Divine Self, Human Self: The Philosophy of Being in Two Gita Commentaries
Read More >

List of Illustrations
Acknowledgments
Abbreviations
Note on Transliteration and Translation

1. Hindu Sectarianism and the City of Victory
2. Royal and Religious Authority in Sixteenth-Century Vijayanagara: A Ma?hadhipati at K?s?n?adevaraya’s Court
3. Sectarian Rivalries at an Ecumenical Court: Vyasatirtha, Advaita Vedanta, and the Smarta Brahmins
4. Allies or Rivals? Vyasatirtha’s Material, Social, and Ritual Interactions with the S´ri¯vais?n?avas
5. The Social Life of Vedanta Philosophy: Vyasatirtha’s Polemics against Visi??advaita Vedanta
6. Hindu, Ecumenical, Sectarian: Religion and the Vijayanagara Court