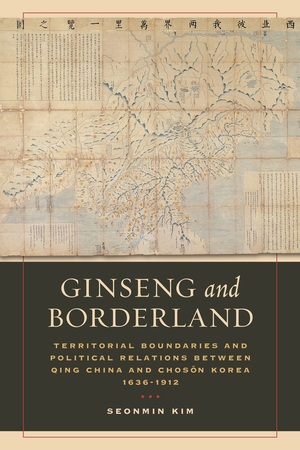 Ginseng and Borderland explores the territorial boundaries and political relations between Qing China and Choson Korea during the period from the early seventeenth to the late nineteenth centuries. By examining a unique body of materials written in Chinese, Manchu, and Korean, and building on recent studies in New Qing History, Seonmin Kim adds new perspectives to current understandings of the remarkable transformation of the Manchu Qing dynasty (1636–1912) from a tribal state to a universal empire. This book discusses early Manchu history and explores the Qing Empire’s policy of controlling Manchuria and Choson Korea. Kim also contributes to theKorean history of the Choson dynasty (1392–1910) by challenging conventional accounts that embrace a China-centered interpretation of the tributary relationship between the two polities, stressing instead the agency of Choson Korea in the formation of the Qing Empire. This study demonstrates how Koreans interpreted and employed this relationship in order to preserve the boundary—and peace—with the suzerain power. By focusing on the historical significance of the China-Korea boundary, this book defines the nature of the Qing Empire through the dynamics of contacts and conflicts under both the cultural and material frameworks of its tributary relationship with Choson Korea.

Seonmin Kim is Associate Professor at the Research Institute of Korean Studies at Korea University.

"Kim’s indispensable book nevertheless provides much of interest and opens up further avenues for research."—Asian Affairs

"Seonmin Kim’s work . . . presents a timely intervention into the ongoing debates about the East Asian tributary model through a detailed study of the relationship between the Qing China (1644–1912) and Choson Korea (1392–1910). Even though Choson was considered to be the model tributary of Ming China (1368–1644), Ginseng and Borderland builds on previous scholarship to show that the relationship between China, Manchuria, and Korea took a tripartite form."—Pacific Affairs

"Kim makes a very important contribution to our knowledge of the conceptions of territory and foreign relations of both the Qing dynasty and Choson Korea. Her work is superbly detailed, focusing on specific incidents of border conflict, border crossing, and border trade. She illuminates the special social history of the border region, beyond simple diplomatic history, integrating economic analysis with social and political description."—Peter C. Perdue, Yale University

"Following the lucrative ginseng trail across the mountains of Manchuria, Seonmin Kim explores the processes whereby the imperial Qing borderland with Choson Korea gradually disappeared, replaced by modern national boundaries. This well-researched study shows the surprising power of weaker actors over the strong and will be of value to historians interested in frontiers, territoriality, and migration."—Mark Elliott, Professor of Chinese and Inner Asian History, Harvard University