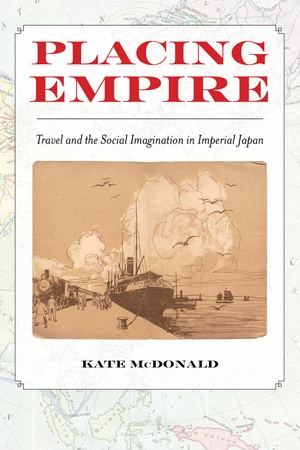 Placing Empire Travel and the Social Imagination in Imperial Japan

Read now at luminosoa.org
About the Book From Our Blog About the Author Reviews Table of Contents Awards Media Related Books

Placing Empire examines the spatial politics of Japanese imperialism through a study of Japanese travel and tourism to Korea, Manchuria, and Taiwan between the late nineteenth century and the early 1950s. In a departure from standard histories of Japan, this book shows how debates over the role of colonized lands reshaped the social and spatial imaginary of the modern Japanese nation and how, in turn, this sociospatial imaginary affected the ways in which colonial difference was conceptualized and enacted. The book thus illuminates how ideas of place became central to the production of new forms of colonial hierarchy as empires around the globe transitioned from an era of territorial acquisition to one of territorial maintenance.

Kate McDonald is Associate Professor of Modern Japanese History at the University of California, Santa Barbara.

"Kate McDonald’s masterful analysis interweaves theory and primary texts to examine the spatial politics of 'place' in the context of imperial Japan."—Monumenta Nipponica

"Essential reading for anyone who seeks to understand the popular support underpinning Japan’s imperialist expansion in the early twentieth century . . . it will encourage all historians to think more carefully about the ways that their own narratives contribute to the spatial politics of the societies we study."—Journal of Japanese Studies

"Tourism 'made' the empire and was instrumental in turning Asian lands into Japanese space. In her thoughtful and sophisticated study, Kate McDonald shows how traveling to overseas battlefields and cultural sights not only brought the empire closer for many Japanese, but also made it home."—Sebastian Conrad, author of The Quest for the Lost Nation: Writing History in Germany and Japan in the American Century

"McDonald re-creates a geographic and social imaginary of colonial incorporation through Japanese travel and tourism. Bold and ambitious, this book contributes to the understanding of the spatial politics of empire building, a subject of great interest to scholars of Japanese empire and beyond."—Leo T.S. Ching, Duke University


"Richly researched and written in an accessible language, Placing Empire interrogates imperial tourism as an essential engine that drove the making of empire. McDonald brings into focus the mechanisms of imperial tourism to explain how colonial territories—Korea, Manchuria and Taiwan— were incorporated into the empire, not only in terms of geography but, more important, of social imagination. A long-awaited and timely contribution to the field."—Helen J.S. Lee, Yonsei University
Read More >

Part I. The Geography of Civilization
1. Seeing Like the Nation
2. The New Territories

For the past 11 years, UCSB historian Kate McDonald has had tourism on her mind - the tourism of early 20th century Japan. The resulting book “Placing Empire: Travel and the Social Imagination in Imperial Japan,” has just come out. It investigates tourism, movement, and territory in Japan in the early 1900s, and how that travel contributed to the creation of a Japanese national identity. McDonald’s book looks at land and mobility, using a unique lens to examine the origins of the Japanese empire and identity. HFA intern Giovanna Vicini spoke to the author.