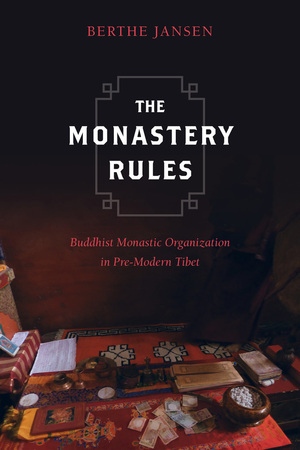 A free ebook version of this title is available through Luminos, University of California Press’s Open Access publishing program. Visit www.luminosoa.org to learn more.
The Monastery Rules discusses the position of the monasteries in pre-1950s Tibetan Buddhist societies and how that position was informed by the far-reaching relationship of monastic Buddhism with Tibetan society, economy, law, and culture. Jansen focuses her study on monastic guidelines, or bca’ yig. The first study of its kind to examine the genre in detail, the book contains an exploration of its parallels in other Buddhist cultures, its connection to the Vinaya, and its value as socio-historical source-material. The guidelines are witness to certain socio-economic changes, while also containing rules that aim to change the monastery in order to preserve it. Jansen argues that the monastic institutions’ influence on society was maintained not merely due to prevailing power-relations, but also because of certain deep-rooted Buddhist beliefs.

"The Monastery Rules is one of the most important contributions to Tibetan studies to emerge in recent years because of the author’s ability to situate the story of Tibetan monasticism within mainstream Buddhist Studies as well as to address important questions in Buddhist ethics."—Journal of Buddhist Ethics

“In its geographical, temporal and topical focus, the range of the book is exceptional. . . . a great reference for anyone studying Buddhist economies, Buddhist institutions, the Vinaya and the history of Tibetan and Mongolian societies, and of monastic institutions more generally. By surveying and compiling vast stores of knowledge on monastic guidelines, Jansen is able to illustrate compellingly the socio-economic relationships between pre-1950s monastic institutions and the laity.”—Inner Asia (INAS)

"In this excellent study, the author undoes the myth that Tibetan monks and monasteries were ever completely separated from lay society, highlighting the complex social role that monasteries negotiated in premodern Tibet."—Reading Religion

"The Monastery Rules offers an excellent specialist study of Tibetan Buddhist monasticism, which emphasizes indigenous voices and. . . . constitutes a monumental achievement that breaks new ground on an understudied but vitally important topic."—Eastern Buddhist

"This work will be a great contribution to Tibetan studies. It will provide an invaluable resource for those interested in a richer picture of traditional Tibet and its monastic life. The book is also quite original, describing a number of aspects of Tibetan monasticism that are not well known. I have learned a number of facts that I ignored about Tibetan monasticism. Hence, I can say with great confidence that this book will be an important scholarly resource."—Georges Dreyfus, Jackson Professor of Religion, Williams College, author of The Sound of Two Hands Clapping

"This book provides a welcome and much needed contribution to our understanding of Tibetan monasticism. While monastic institutions have long been recognized as hubs of Buddhist life in Tibet, this study provides an extensive and granular exploration of premodern Tibetan monasteries as sites of community organization and integration, and as mediators of religious power."—Andrew Quintman, author of The Yogin and the Madman: Reading the Biographical Corpus of Tibet’s Great Saint Milarepa

Acknowledgments
A Note on Transliteration

Introduction
1. Documents That Establish the Rules: The Genre of Chayik
2. Historical and Doctrinal Frameworks of Monastic
Organization in Tibet
3. Entrance to the Monastery
4. Monastic Organization
5. Monastic Economy and Policy
6. Relations with the Laity: The Roles of the Monastery in Society
7. Justice and the Judicial Role of the Monastery
8. Maintaining (the) Order: Conclusions