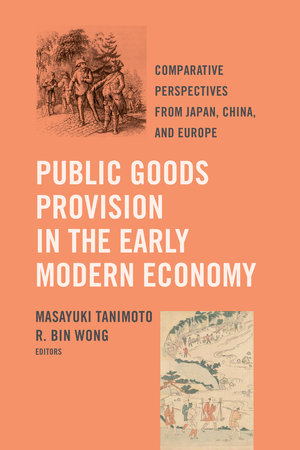 Read now at luminosoa.org Read an Excerpt
About the Book About the Author Reviews Related Books

A free ebook version of this title is available through Luminos, University of California Press’s Open Access publishing program. Visit www.luminosoa.org to learn more.
Scholarly discussions on economic development in history, specifically those linked to industrialization or modern economic growth, have paid great attention to the formation and development of the market economy as a set of institutions able to augment people’s welfare. The role of specific nonmarket practices for promoting the economic development and welfare has been a distinct concern, typically involving discussion of the state’s economic policies. How have societies tackled those issues that the market did not? To what extent did those solutions reflect the structure of an economy?

Public Goods Provision in the Early Modern Economy explores these questions by investigating efforts made for the provision of "public goods" in early modern economies from the perspective of Japanese socioeconomic history during Tokugawa era (1603–1868), and by comparing those cases with others from Europe and China’s economic history. The contributors focus on three areas of inquiry—early modern era welfare policies for the poor, infrastructure, and forest management—to provide both a unique perspective on Japanese public finance at local levels and a vantage point outside of Europe to encourage a more global view of early modern political economies that shaped subsequent modern transformations.

R. Bin Wong is Distinguished Professor of History at University of California, Los Angeles, and coauthor of Before and Beyond Divergence: The Politics of Economic Change in China and Europe.

"With new global evidence that goes well beyond the timeworn topics of taxation and military spending, Public Goods Provision will make historians and social scientists rethink the development of fiscal systems, the history of public spending, and the long run pattern of political and economic development."—Philip T. Hoffman, author of Why Did Europe Conquer the World?

“This pioneering volume is a comparative study of the role of government in the premodern economy in Europe and in Asia. There is much original and valuable material on whether and how governments provided public goods in these very different societies.”—Gregory Clark, author of The Son Also Rises: Surnames and the History of Social Mobility