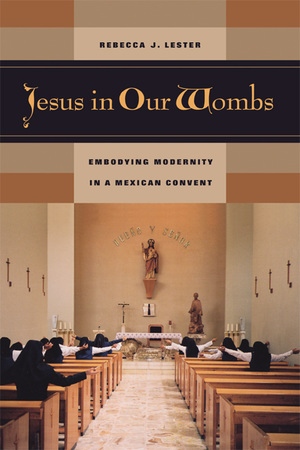 Jesus in Our Wombs Embodying Modernity in a Mexican Convent

Does a theory of the self require a theory of the body? If so, why? How might the systematic theorizing of an embodied self alter our understanding of subjectivity and social processes? This book is an account of how eighteen young women in a Mexican convent engaged in certain bodily practices with the explicit aim of reshaping their subjective experiences along a particular line of development. As such, it is a grounded engagement with current debates regarding embodiment and experience. But it is also an exploration of the ways in which gendered subjectivities may become politically and socially charged as a means of articulating cultural conflicts about modernity and how these larger meanings take on significance for people on the most intimately personal levels. Fundamentally, then, this book addresses the question of how we create meaning in our lives through embodied practice. I approach these issues within the context of a Roman Catholic convent in Puebla de los Angeles, Mexico, a highly elaborated domain for the production of embodied self-knowledge.

At 4:45 the Grand Silence is compromised as eighteen sleepy young nuns tumble from their beds to recite the rising prayer in the cold darkness of the convent dormitory: "I pray, Lord, that you accept all my works, my thoughts, my emotions, and my desires as reparation for the many sins that will be committed today in this world...." In the echoing silence following the prayer, thirty-six bare feet pad across the cold stone floor toward the showers. Arms and legs are scrubbed, faces washed, and teeth brushed in preparation for morning prayers. Hospital-like curtains are pulled around the small beds, and shadows play behind them as the young women slip on the various layers of the blue postulant uniform over white cotton undergarments and arrange delicate black veils carefully over their still-damp hair. In the cool, predawn blackness the young women file out of the dormitory, down two flights of stairs, across the patio, through a hallway, and into the chapel, where they will remain in concentrated meditation for the next two hours.

Another day has begun for the postulants of "the Siervas," a shorthand for the congregation's official name.1 Unlike cloistered orders, which are devoted to prayer and contemplation, active-life orders like the Siervas view it as their mission to labor tirelessly and selflessly in the service of others, particularly those on the margins of society: the poor, the forgotten, the fallen souls. Every moment of every day the nuns mortify their bodies and their souls, their sacrifice a powerful force in the salvation of the world. They strive to become living testimonies of Christ's immeasurable love, and they hope that as His2 brides, each will serve as a humble exemplar of how to be a woman in a world gone mad.

For many in Mexico today the world seems, indeed, to have gone mad. It is a world where politicians funnel eighty-four million dollars from the national coffers into Swiss bank accounts, where protesters sew their mouths closed with black nylon string in politically motivated hunger strikes, where students take to the streets in angry riots, and where policemen slaughter dozens of campesinos and hide their bodies in shallow graves. Divorces and homicides are up, literacy rates and education are down, and many young people seem more engaged with what's happening on Friends than in their own backyards.

But something curious is happening at the margins of the political turmoil and social upheaval. Each year scores of young women—more and more each year—are leaving the warmth and protection of their homes, leaving their friends, their families, their high schools and universities, to march through the convent doors, where they will surrender themselves body and soul to Christ for eternity. The estimates are staggering.3 But despite a general increase, one congregation—the Siervas—stands out, boasting a tripling of new entrants over the last fifteen years.4

What might motivate a young Mexican woman to become a nun at a time when a modernizing Mexico offers her so many new and exciting opportunities not open to women only a generation ago? What might a young woman's feeling of religious vocation tell us about changing constructions of womanhood and femininity in the wake of these social transformations? And what might account for the startling revival of interest in this particular congregation?

I spent eighteen months with the entering class of new Siervas during 1994-95. When I first went to the field I was concerned with trying to understand young women's motivations for entering a nunnery. I wanted to get a feel for what goes on emotionally, psychologically, and spiritually with these women as they try to decide if they should pledge themselves eternally to Christ and the church. I soon found, however, that the question I should be asking was not so much what brought the women to the convent. Most of these young women decided to enter the nunnery, I discovered, with only a vague understanding of what the religious life was or what to expect once they got there. The more interesting question, I realized, was what kept these women there, day after day. The year of the postulancy is a kind of trial period. The door is open. The postulants have taken no vows and, as they are continually reminded, are free to leave at any time. So what keeps them there, waking up at 4:45 in the morning to bathe with cold water and sit in silent prayer for two hours before breakfast? What keeps them there, working and studying, unable to make even small purchases, write a letter, or make a phone call without permission from a superior? What keeps a woman there, knowing she will never again lead an independent life, will never have a home and a family of her own, but must instead remain poor, chaste, and obedient in the service of Christ or risk the eternal damnation of her immortal soul? Clearly, something more is going on for these women than a superficial infatuation with the idea of the religious life or a desire to take advantage of the economic resources the convent might offer to a poor girl from a Mexican pueblo. Something is go

In Jesus in Our Wombs, Rebecca J. Lester takes us behind the walls of a Roman Catholic convent in central Mexico to explore the lives, training, and experiences of a group of postulants—young women in the first stage of religious training as nuns. Lester, who conducted eighteen months of fieldwork in the convent, provides a rich ethnography of these young women's journeys as they wrestle with doubts, fears, ambitions, and setbacks in their struggle to follow what they believe to be the will of God. Gracefully written, finely textured, and theoretically rigorous, this book considers how these aspiring nuns learn to experience God by cultivating an altered experience of their own female bodies, a transformation they view as a political stance against modernity.

Lester explains that the Postulants work toward what they see as an "authentic" femininity—one that has been eclipsed by the values of modern society. The outcome of this process has political as well as personal consequences. The Sisters learn to understand their very intimate experiences of "the Call"—and their choices in answering it—as politically relevant declarations of self. Readers become intimately acquainted with the personalities, family backgrounds, friendships, and aspirations of the Postulants as Lester relates the practices and experiences of their daily lives. Combining compassionate, engaged ethnography with an incisive and provocative theoretical analysis of embodied selves, Jesus in Our Wombs delivers a profound analysis of what Lester calls the convent's "technology of embodiment" on multiple levels—from the phenomenological to the political.

“Skillfully blends classic psychoanalytic theory and postmodernism. . . . This is a highly original contribution to the anthropological study of embodiment, gender, and religion.”—S.D. Glazier, University of Nebraska-Lincoln Choice: Current Reviews For Academic Libraries

"A stunning first book, Jesus In Our Wombs is a haunting ethnography with fresh theoretical insights. Blending psychoanalytic theories with postmodern imageries, Lester demonstrates that the body is both a source and object of analysis. This is a model ethnography."—Vicki Ruiz, author of From Out of the Shadows: Mexican Women in the Twentieth-Century America

"In Jesus In Our Wombs, Rebecca Lester uses her rich, evocative ethnography of the first year experiences of nuns-in-training to explore the formation and transformation of selves, the relationships of bodily practices, and the centrality of gender to these intertwined processes of self-formation and embodiment. This work will spark renewed interest in the potential of psychoanalysis and psychoanalytic theories of change to offer insights for crucial theoretical issues in anthropology and the social sciences more generally. A superb book."—Dorothy Hodgson, author of The Church of Women: Gendered Encounters between Maasai and Missionaries

"This study of young Mexican nuns in their first year of training is a thought provoking and ethnographically rich work that will be an important contribution to the anthropological study of religion, gender, and embodiment. Through her careful analysis of the ways the postulates negotiate their training intellectually, emotionally, and bodily, Lester provides unique insights into the religious processes of personal transformation. A beautifully observed ethnography of life in a Catholic convent."—Joel Robbins, author of Becoming Sinners: Christianity and Moral Torment in a Papua New Guinea Society