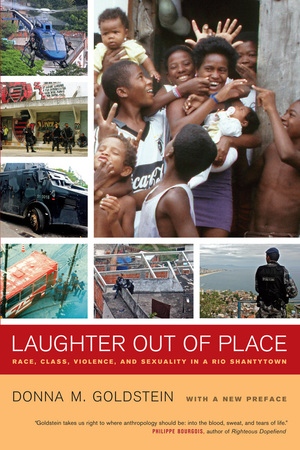 Laughter Out of Place Race, Class, Violence, and Sexuality in a Rio Shantytown, With a New Preface

Donna M. Goldstein presents a hard-hitting critique of urban poverty and violence and challenges much of what we think we know about the "culture of poverty" in this compelling read. Drawing on more than a decade of experience in Brazil, Goldstein provides an intimate portrait of everyday life among the women of the favelas, or urban shantytowns in Rio de Janeiro, who cope with unbearable suffering, violence and social abandonment. The book offers a clear-eyed view of socially conditioned misery while focusing on the creative responses—absurdist and black humor—that people generate amid daily conditions of humiliation, anger, and despair. Goldstein helps us to understand that such joking and laughter is part of an emotional aesthetic that defines the sense of frustration and anomie endemic to the political and economic desperation among residents of the shantytown.

Donna M. Goldstein is Associate Professor of Anthropology at the University of Colorado, Boulder.

“Laughter Out of Place will appeal to a broad readership since it is so skillfully addresses such a wide range of issues. This is a book which is accessible and challenging and is to be highly recommended: it is a must on any race and gender course but will equally be of interest to those scholars and students of Latin America, anthropology and sexuality.”—Andrew Canessa - University of Essex, UK Sexualities

"Goldstein returns anthropology to what it does best while taking the reader on a no-holds-barred ride through the tragicomic world of a Rio favela. She captures the bittersweet laughter of Brazil's vast subterranean underclass of domestic servants who keep their anger and despair at bay by laughing and spitting into the face of chaos, injustice, and premature death. In this affecting and deft 'comedy of manners,' Goldstein emerges as urban anthropology's new Jane Austen."—Nancy Scheper-Hughes, author of Death without Weeping: The Violence of Everyday Life in Brazil

"Goldstein takes us right to where anthropology should be: into the blood, sweat, tears of shantytown life. Laughter Out of Place tells the story of a Brazilian family on the edge of survival where women and children struggle, not just to stay alive, but also for joy in the face of poverty, men, and mutual betrayal."—Philippe Bourgois, author of In Search of Respect: Selling Crack in El Barrio

"A stunning ethnographic achievement that should become an urban anthropological classic. Goldstein brings us close to women who under extraordinary circumstances of poverty use humor to reveal the penetrating truth of their relationship to structures of power and the ironies of their raced, classed, and gendered lives. Superb and engaging ethnographic analysis is framed by sophisticated social theory and a comprehensive treatment of the literature on contemporary Brazilian society."—Judith Goode, co-editor of The New Poverty Studies: The Ethnography of Power, Politics and Impoverished People in the United States

List of Illustrations
Foreword
Preface to the 2013 Edition
Acknowledgments