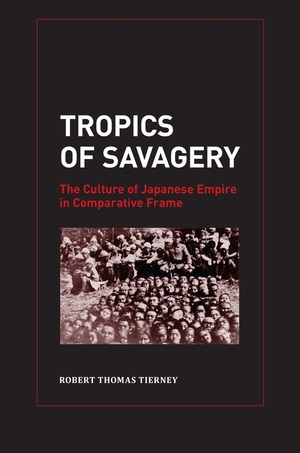 Tropics of Savagery The Culture of Japanese Empire in Comparative Frame

Tropics of Savagery is an incisive and provocative study of the figures and tropes of “savagery” in Japanese colonial culture. Through a rigorous analysis of literary works, ethnographic studies, and a variety of other discourses, Robert Thomas Tierney demonstrates how imperial Japan constructed its own identity in relation both to the West and to the people it colonized. By examining the representations of Taiwanese aborigines and indigenous Micronesians in the works of prominent writers, he shows that the trope of the savage underwent several metamorphoses over the course of Japan's colonial period--violent headhunter to be subjugated, ethnographic other to be studied, happy primitive to be exoticized, and hybrid colonial subject to be assimilated.

Robert Thomas Tierney is Assistant Professor of East Asian Languages and Cultures at the University of Illinois, Urbana-Champaign.

“Tierney has demonstrated adequately an insightful argument sustaining the similarity between the experiences of non-Western and Western colonization.”—Bltn Of The Institute Of Chinese Literature & Philosophy

“An invaluable window through which one can appreciate wide-ranging experiences and interpretations of colonialism in prewar and wartime Japan.”—World History Connected

“Tropics of Savagery is a readable, analytical, and introspective work.”—Bltn Of The Institute Of Chinese Literature & Philosophy

"Robert Tierney's Tropics of Savagery presents a most incisive and provocative account of Japanese colonial discourse. Tierney pursues a deeper understanding of Japan's imperialism through rich and powerful narratives and analysis."—Leo Ching, author of Becoming 'Japanese': Colonial Taiwan and the Politics of Identity Formation

"Tierney offers one of the first serious evaluations of how Japanese came to look upon their new colonial possessions and how this imperial impulse was displaced through a tropic mechanism that appealed to the figures of savagery and primitivism. He not only provides readings of important but unfamiliar Japanese writers; he positions them in such a way as to tell a narrative that simply hasn't been told. An outstanding work."—Harry Harootunian, author of Overcome by Modernity: History, Culture, and Community in Interwar Japan

1. From Taming Savages to Going Native: Self and Other on the Taiwan Aboriginal Frontier
2. Ethnography and Literature: Sat Haruo’s Colonial Journey to Taiwan
3. The Adventures of Momotar in the South Seas: Folklore, Colonial Policy, Parody
4. The Colonial Eyeglasses of Nakajima Atsushi