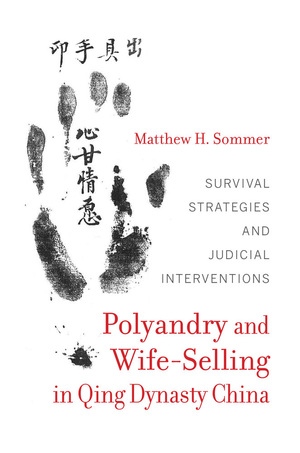 This book is a study of polyandry, wife-selling, and a variety of related practices in China during the Qing dynasty (1644-1912). By analyzing over 1200 legal cases from local and central court archives, Matthew Sommer explores the functions played by marriage, sex, and reproduction in the survival strategies of the rural poor under conditions of overpopulation, worsening sex ratios, and shrinking farm sizes. Polyandry and wife-selling represented opposite ends of a spectrum of strategies. At one end, polyandry was a means to keep the family together by expanding it. A woman would bring in a second husband in exchange for his help supporting her family. In contrast, wife sale was a means to survive by breaking up a family: a husband would secure an emergency infusion of cash while his wife would escape poverty and secure a fresh start with another man.

Even though Qing law prohibited both practices under the rubric “illicit sexual relations,” Sommer shows how magistrates charged with propagating and enforcing a fundamentalist Confucian vision of female chastity tried to cope with their social reality in the face of daunting poverty. This contradiction illuminates both the pragmatism of routine adjudication and the increasingly dysfunctional nature of the dynastic state in the face of mounting social crisis. By casting a spotlight on the rural poor and the experiences of both men and women, Sommer provides an alternative to the standard paradigms of women’s history that have long dominated scholarship on gender and sexuality in late imperial China.

Matthew H. Sommer teaches Chinese history at Stanford University. He is the author of Sex, Law, and Society in Late Imperial China.

"Sommer’s exhaustive analysis of legal cases involving illegal marriage practices is the first systematic attempt to document their prevalence and grapple with their implications for our understanding of gender order and state-society relations in the Qing."—Janet M Theiss Cross Currents

"The book, based on a thorough and probing reading of a prodigious number of heretofore unexamined archival documents, offers unparalleled insights... with its vivid recounting of the passion, violence, and desperation that motivated the men and women implicated in illicit practices of polyandry, wife sale, and prostitution, it animates the historical record."—American Historical Review

"Enlightening, provocative, and path-breaking, Matthew Sommer’s Polyandry and Wife-Selling in Qing Dynasty China has the hallmarks of a seminal work that will be a starting point for future discussions of marriage practices in Qing China as well as late imperial social and legal history."—Nan Nü

“China historians have been waiting a long time for this book, and scholars of sexuality and gender who work on other regions of the early modern world—even if they don’t know they have been waiting for it—are going to be mesmerized. There is nothing else like it in print.”—Gail Hershatter, author of The Gender of Memory: Rural Women and China's Collective Past


"What was the meaning of marriage, family, and sexuality for the many impoverished Chinese struggling to survive in the High Qing? In this beautifully researched study, Matthew Sommer patiently reconstructs the logic of difficult and often desperate choices made by men and women whose lives emerge, piecemeal, in the vast court records of the long eighteenth century. His formidable knowledge of and great empathy for his subjects make this work a joy to read. This is an essential study for understanding gender, family, and sexuality in the early modern world."—Paula Findlen, Professor of History, Stanford University
Read More >