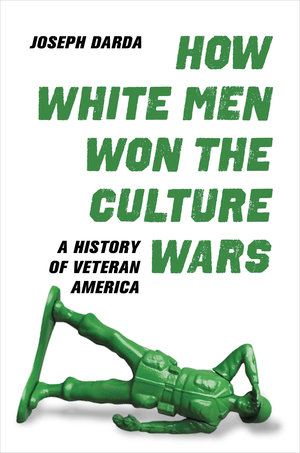 A cultural history of how white men exploited the image of the Vietnam veteran to roll back civil rights and restake their claim on the nation.

“If war among the whites brought peace and liberty to the blacks,” Frederick Douglass asked in 1875, peering into the nation’s future, “what will peace among the whites bring?” The answer then and now, after civil war and civil rights: a white reunion disguised as a veterans’ reunion.

How White Men Won the Culture Wars
shows how a broad contingent of white men––conservative and liberal, hawk and dove, vet and nonvet––transformed the Vietnam War into a staging ground for a post–civil rights white racial reconciliation. Conservatives could celebrate white vets as deracinated embodiments of the nation. Liberals could treat them as minoritized heroes whose voices must be heard. Erasing Americans of color, Southeast Asians, and women from the war, white men could agree, after civil rights and feminism, that they had suffered and deserved more. From the POW/MIA and veterans’ mental health movements to Rambo and “Born in the U.S.A.,” they remade their racial identities for an age of color blindness and multiculturalism in the image of the Vietnam vet. No one wins in a culture war—except, Joseph Darda argues, white men dressed in army green.

“Original and persuasive. . . . A wide-ranging and provocative tour through the post-Vietnam cultural and political scene.”—The New Republic

"Simultaneously uplifting and disconcerting, How White Men Won the Culture Wars is recommended for all readers interested in US history, particularly those interested in looking at contemporary commonalities but more specifically the ways race has been used in culture wars. There simply is not another book quite like this, making Darda’s work groundbreaking."

"How White Men Won the Culture Wars identifies a meta-phenomenon evocative of the existential precipice faced by Germany after its loss of the First World War, which is among the unsettling takeaways from this unique contribution to studies of American political culture."

"A book of incandescent insight—a clear and persuasive account of how the misuse of wartime service has been coopted into a mythos of whiteness that ultimately threatens American democracy. This is required reading for anyone who wants to understand contemporary politics or the history of the recent past."—Kathleen Belew, author of Bring the War Home: The White Power Movement and Paramilitary America

"An illuminating study of the whiteness of war culture, How White Men Won the Culture Wars deftly illustrates how stories about the Vietnam War transformed the Vietnam vet into a vessel for a post–civil rights white racial countermovement that appeared, on the surface, color-blind and race neutral."—Yen Lê Espiritu, author of Body Counts: The Vietnam War and Militarized Refuge(es)


"Highly original, inventive, and even generative, this is one of the best books I have read in the past twenty-five years. It achieves impressive coherence around its provocative and forthright argument, but with no hint of moral grandstanding."—David Roediger, author of The Wages of Whiteness and Working toward Whiteness

"Joseph Darda is an incisive critic of the complex ways race and empire emerge in the figure of the veteran. How White Men Won the Culture Wars reveals how the 'Vietnam vet' was enlisted—and sometimes volunteered—to unite liberals and conservatives behind an aggrieved and universalizing white masculinity, reinscribing white supremacy as patriotism under the sign of trauma. An urgent and necessary work."—Roy Scranton, author of Total Mobilization: World War II and American Literature
Read More >