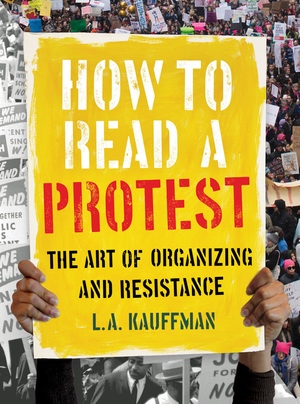 How to Read a Protest The Art of Organizing and Resistance

"Explores protesting as an act of faith . . . How to Read a Protest argues that the women's marches of 2017 didn't just help shape and fuel a moment—they actually created one."—Masha Gessen, The New Yorker


O, the Oprah Magazine’s “14 Best Political Books to Read Before the 2018 Midterm Election”

"A fascinating and detailed history of American mass demonstrations."—Publishers Weekly

When millions of people took to the streets for the 2017 Women’s Marches, there was an unmistakable air of uprising, a sense that these marches were launching a powerful new movement to resist a dangerous presidency. But the work that protests do often can’t be seen in the moment. It feels empowering to march, and record numbers of Americans have joined anti-Trump demonstrations, but when and why does marching matter? What exactly do protests do, and how do they help movements win?

In this original and richly illustrated account, organizer and journalist L.A. Kauffman delves into the history of America’s major demonstrations, beginning with the legendary 1963 March on Washington, to reveal the ways protests work and how their character has shifted over time. Using the signs that demonstrators carry as clues to how protests are organized, Kauffman explores the nuanced relationship between the way movements are made and the impact they have. How to Read a Protest sheds new light on the catalytic power of collective action and the decentralized, bottom-up, women-led model for organizing that has transformed what movements look like and what they can accomplish.

2019’s Los Angeles Times Festival of Books has nearly arrived! Hosted at the University of Southern California, the Los Angeles Times organizes a weekend full of performances, panel discussions, and the annual …

A Global Movement for Gender Equality

Women around the globe are taking to the streets today, International Women’s Day (IWD), to protest on a range of issues from pay gaps, to gender-based violence, to forced marriages, and to rally …

Two years after more than 4 million women around the world took to the streets in protest of Donald Trump’s inauguration, demonstrators are once again coming together for the third-annual Women’s March. But what do …

L.A. Kauffman has been a grassroots organizer and movement journalist for more than thirty-five years. She was the mobilizing coordinator for some of the largest demonstrations in U.S. history—the massive Iraq antiwar protests of 2003 and 2004—and has played key roles in many other movements and campaigns. Kauffman's writings on organizing and resistance have appeared in The Guardian, n+1, Frieze, and numerous other publications, and she is the author of Direct Action: Protest and the Reinvention of American Radicalism.

"A fascinating and detailed history of American mass demonstrations"—Publishers Weekly

"Explores protesting as an act of faith . . . How to Read a Protest argues that the women's marches of 2017 didn't just help shape and fuel a moment—they actually created one."—Masha Gessen The New Yorker

“At a little over a hundred pages, it’s a quick read but Kauffman’s familiarity with the mechanics of mass protest and the history of the U.S. left over the past half-century are evident throughout.”—The Indypendent

“A quick and easy read, filled with amazing historical images. Kauffman was a mobilizing coordinator for some of the largest Iraq War demonstrations, and her sources and mentors include some of the most driven organizers in movement building in the US since 1963. If you’ve ever organized a protest or put your theory into praxis, you’re going to find this book a real page-turner.”—AfterEllen

Listed as one of the "14 Best Political Books to Read Before the 2018 Midterm Election."

"A seasoned activist shares her wisdom on the struggle for social change, using political movements such as Black Lives Matter, the Women's March, and the Bonus Army as examples."—O, The Oprah Magazine

“Richly illustrated and drawing upon the latest research on social movements and their histories, this is an engrossing and thought-provoking read for anyone who’s ever felt exhilarated – or frustrated – at a mass protest.”—Peace News

“For a first draft of history still in the making, Kauffman is right to focus on the broad scale and wide impact of the Women’s Marches of 2017. As she persuasively shows, marches need not be the apex of a movement’s rise; they can also be its generative soil."—The New Republic

“How to Read a Protest begins, “Protests work?—?just not, perhaps, the way you think.” There are few people better placed to explain that than Kauffman.”—Hong Kong Free Press

"Drawing on 30-plus years as a grassroots organizer, L.A. Kauffman sheds new light on how and why protests work.”—Sojourners

“Kauffman sheds new light on the catalytic power of collective action and the decentralized, bottom-up, women-led model that has transformed what movements look like and what they can accomplish.”—EcoWatch

“If you’re an organizing nerd like we are, seriously, go read How to Read a Protest: the Art of Organizing and Resistance!”—Healthcare-Now

“L.A. Kauffman is one of the people I look to most for the big picture about American activism—where it’s been, where it’s going, what works, who’s doing the work, and why. For How to Read a Protest, you could paraphrase George Orwell to say that those who remember the past understand the present, and those who understand the present (sometimes) shape the future. This swift-moving book equips us all to do exactly that, as it revises and deepens and corrects what we know about past social movements in America and appraises what has made the women-led, grassroots resistance to Trump unlike any movement that came before. The next chapter is something we will all write together if and when we rise to the promise and the legacy of the radical past that Kauffman so ably describes.”—Rebecca Solnit, author of Hope in the Dark: Untold Histories, Wild Possibilities

“How to Read a Protest is an incredible tool for understanding collective action: who is involved, how it unfolds, and what makes it successful, with special emphasis on the often-overlooked role of women in making movements and how ideas of organization and leadership have shifted. L.A. Kauffman helps us understand and interpret the reasons behind, and meanings of, protest in our time, giving us a valuable gift of insight and research.”—Marina Sitrin, coauthor of They Can’t Represent Us! Reinventing Democracy from Greece to Occupy

“L.A. Kauffman is a marvelous combination of mobilization-insider and historical commentator. No one else could bring so much fruitful commentary to bear on mass protests. The illustrations here are fascinating in themselves, wonderful to observe and ponder. This is a splendid and much-needed book.”—Paul Buhle, coeditor of the Encyclopedia of the American Left
Read More >

HOW TO READ A PROTEST