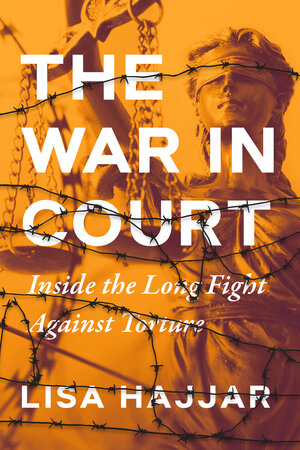 The War in Court Inside the Long Fight against Torture

How hundreds of lawyers mobilized to challenge the illegal treatment of prisoners captured in the war on terror and helped force an end to the US government's most odious policies.

In The War in Court, sociologist Lisa Hajjar traces the fight against US torture policy by lawyers who brought the "war on terror" into courts. Their victories, though few and far between, forced the government to change the way prisoners were treated and focused attention on state crimes perpetrated in the shadows. If not for these lawyers and their allies, US torture would have gone unchallenged because elected officials and the American public, with a few exceptions, did nothing to oppose it. This war in court has been fought to defend the principle that there is no legal right to torture.

Told as a suspenseful, high-stakes story, The War in Court clearly outlines why challenges to the torture policy had to be waged on the legal terrain and why hundreds of lawyers joined the fight. Drawing on extensive interviews with key participants, her own experiences reporting from Guantánamo, and her deep knowledge of international law and human rights, Hajjar reveals how the ongoing fight against torture has had transformative effects on the legal landscape in the United States and on a global scale.

By Lisa Hajjar, author of The War in Court: Inside the Long Fight against Torture I made my first trip to Guantánamo in July 2010 after years of researching the fight against …

Lisa Hajjar is Professor of Sociology at the University of California, Santa Barbara, whose work focuses on the relationship between law and conflict. She is the author of Courting Conflict and Torture: A Sociology of Violence and Human Rights.

"If any words on a page can move the needle on torture in these squalid times, it is these. Read them. Heed them. Act."—Joseph Margulies, Counsel for Abu Zubaydah, "The Forever Prisoner"

"In the wake of the 9/11 attacks, an American president did the inconceivable: he ordered the torture of prisoners of war. It was an unprecedented government assault on human rights, and the only institutions to fight against it were the federal courts. It is a vital story and in The War in Court Lisa Hajjar tells it with great authority and power. An essential book."—Mark Danner, author of Torture and Truth and Spiral: Trapped in the Forever War

"A tour-de-force portrait of war on terror defendants and their legal champions, Lisa Hajjar's The War in Court is a must-read for anyone seeking to understand the consequences of torture after 9/11."—Karen J. Greenberg, author of Subtle Tools: The Dismantling of American Democracy from the War on Terror to Donald Trump

"In The War in Court, Lisa Hajjar tells the heroic story of the lawyers who have tried to force America to live up to its principles and follow the rule of law. This book is an invaluable record of how the US government's embrace of a policy of torture can fundamentally corrupt a nation."—Alex Gibney, Director, The Forever Prisoner

"In The War in Court, Lisa Hajjar creates a richly detailed narrative and historical record focused on the role of lawyers in challenging US torture, which will serve as an important resource for future scholars, students, and practitioners."—Jonathan Hafetz, author of Punishing Atrocities through a Fair Trial: International Criminal Law from Nuremberg to the Age of Global Terrorism


"The War in Court tells a gripping tale. Lisa Hajjar provides a front-row seat to the past twenty-one years of advocacy efforts to thwart the systematic use of torture by the US government. She shatters any liberal fantasies that uniquely evil partisans bear all the blame and demonstrates how the Global War on Terror was a continuation of US imperial tradition. There is no other book like this one."—Noura Erakat, author of Justice for Some: Law and the Question of Palestine
Read More >

Introduction: Why Torture Matters
1 • Taking the "War on Terror" to Court
2 • Enter the Warriors
3 • Mapping the Lines of Battle
4 • The War in Court Takes Off
5 • Winning Some, Losing Some
6 • Fighting for Justice at Home and Abroad
7 • Trying Guantánamo
8 • New Battles, Same War
9 • Obama's Guantánamo
10 • The Last Front
Conclusion: The Afterlives of Torture 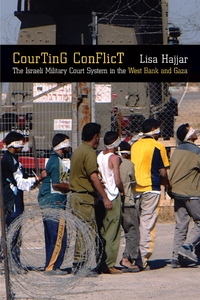