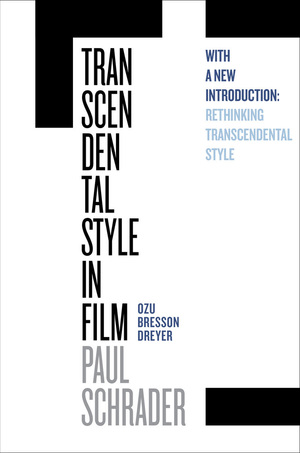 With a new introduction, acclaimed director and screenwriter Paul Schrader revisits and updates his contemplation of slow cinema over the past fifty years. Unlike the style of psychological realism, which dominates film, the transcendental style expresses a spiritual state by means of austere camerawork, acting devoid of self-consciousness, and editing that avoids editorial comment. This seminal text analyzes the film style of three great directors—Yasujiro Ozu, Robert Bresson, and Carl Dreyer—and posits a common dramatic language used by these artists from divergent cultures. The new edition updates Schrader’s theoretical framework and extends his theory to the works of Andrei Tarkovsky (Russia), Béla Tarr (Hungary), Theo Angelopoulos (Greece), and Nuri Bilge Ceylan (Turkey), among others. This key work by one of our most searching directors and writers is widely cited and used in film and art classes. With evocative prose and nimble associations, Schrader consistently urges readers and viewers alike to keep exploring the world of the art film.

“What a convergence. University of California Press publishing an update of TSIF and being acknowledged for First Reformed the same year. As Joel McCrea said in ‘Ride the High Country’, “I can …

With both his critically-acclaimed new film, First Reformed, and an updated edition of his seminal film theory text, Transcendental Style in Film, Paul Schrader is experiencing a career-defining moment. Today Paul Schrader …

As 2017 draws to a close, we’ve compiled ten blog posts that resonated most with our readers over the past year. Popular blog themes closely mirrored current events, and the state of …

Paul Schrader is an American screenwriter and director whose writing credits include Taxi Driver, Raging Bull, and The Last Temptation of Christ and whose directing credits include American Gigolo, Mishima, Light Sleeper, Affliction, and First Reformed. Transcendental Style in Film was first published in 1972 by University of California Press.

"[An] exemplary book of criticism"—New Yorker

"This deep dive into three all-time great moviemakers is the perfect example of why eating your cultural vegetables can be endlessly rewarding, potentially even life-changing."—MovieMaker

“Reading Transcendental Style now, it’s impressive not just how vibrant and convincing a study of a cinematic aesthetics it is, but how prescient it feels.”—Art in America

"This is a joy to read, and all the more startling when discovering that Schrader was 24 years old when he wrote the original text."—Film Stage

"The second edition, particularly graced by Schrader’s new introduction, is especially salient not only for ongoing evaluation of Schrader’s work as critic and filmmaker, but also as a contribution from Schrader himself to the critical task of interpretation and reception of new cinema and burgeoning cinematic movements. Like any number of Schrader’s own screenplays or directed films, this volume rewards repeated visitations."—Journal of Religion & Film

"Schrader’s investigation of mid-century art cinema masters as extensions of spiritual art is worthy of our careful consideration, especially given the legacy of Yasujiro Ozu, Robert Bresson, and Carl Th. Dreyer. . . . Transcendental Style is a masterful work of structure, methodology, and art history."—Offscreen

"A welcome opportunity to revisit one of the few essential works of film theory. You can take issue with Schrader's categories and critera and argue with him as you go, but it's the ground on which the exchange between author and reader occurs that matters most. By exploring and identifying the territory of the transcendental, Paul Schrader and his groundbreaking text illuminate what is most precious in the cinema and, by extension, in art itself."—Kent Jones, filmmaker, writer, festival director

"For students interested in spirituality and cinema, Transcendental Style in Film is the one book I would label indispensable. A well-read copy should be in every cinephile's library."—Kenneth R. Morefield, Professor of English, Campbell University

"As a materialist, I have issues with a transcendental approach toward style, even while supporting Paul Schrader’s critical gifts and his passionate interest in three of my favorite filmmakers. But in his new introduction, his observations about slow cinema from Tarkovsky to Kiarostami to Tarr are every bit as compelling as his earlier insights into film noir."—Jonathan Rosenbaum, author of Placing Movies: The Practice of Film Criticism

"Schrader's book is a classic—one of the very few seminal books on religion/spirituality and film. His new introduction linking transcendental style to the time-images of Deleuze and Tarkovsky, as well as slow cinema, which followed, only adds to its importance. A must read!"—Robert K. Johnston, Professor of Theology and Culture, Fuller Theological Seminary, and author of Reel Spirituality: Theology and Film in Dialogue

"Before most of us, Paul Schrader sensed, deep in the bones of cinematic form, a potential for spiritual expression. This seminal work has set the terms of the film and religion discussion for decades now. Whether you are fully persuaded by his argument or not, Schrader compels you to take both cinematic form and the impulse toward transcendence seriously. This book remains essential."—Joseph G. Kickasola, Professor of Film and Digital Media, Baylor University, and author of The Films of Krzysztof Kieslowski: The Liminal Image

"Paul Schrader's Transcendental Style in Film was a work of striking originality when it appeared some forty-five years ago, all the more remarkable for having been written by a twenty-four-year-old. Though the term 'transcendental style' was in the air, no one before Schrader had identified and analyzed the style with such acuity and depth as he did, and with such wide acquaintance with the relevant literature of philosophical aesthetics and film theory. Since then, the book has become a classic in the history of film theory; its re-issuance, with a lengthy new introduction by Schrader, is welcome. The new introduction is titled 'Rethinking Transcendental Style,' but it turns out that everything Schrader wrote forty-five years ago about transcendental style has stood the test of time. What the new introduction does is set transcendental style within the context of the proliferation in recent decades of anti-narrative 'slow films.' The new introduction is as rich and illuminating in its analyses of these new developments as was the original text of the transcendental style, making clear how these new developments, though superficially similar, are yet fundamentally different."—Nicholas Wolterstorff, Noah Porter Professor Emeritus of Philosophical Theology, Yale University, and author of Art Rethought

"With an extensive new introduction, Paul Schrader brings his influential work on transcendental style up to date, relating it to contemporary slow cinema and to recent developments in film criticism. This book is essential for anyone interested in the means by which narrative film can encourage spectators to 'lean into' the film, to experience contemplation and the transcendent."—Carl Plantinga, author of Screen Stories: Emotion and the Ethics of Engagement