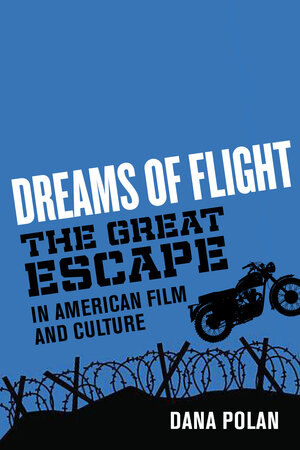 Dreams of Flight "The Great Escape" in American Film and Culture

The first full-length study of the iconic 1960s film The Great Escape and its place in Hollywood and American history.

Escaped POW Virgil Hilts (Steve McQueen) on a stolen motorcycle jumps an imposing barbed wire fence—caught on film, the act and its aftermath have become an unforgettable symbol of triumph as well as defeat for 1960s America. Combining production and reception history with close reading, Dreams of Flight offers the first full-length study of The Great Escape, the classic film based on a true story of Allied prisoners who hatched an audacious plan to divert and thwart the Wehrmacht and escape into the nearby countryside.

Through breezy prose and pithy analysis, Dana Polan centers The Great Escape within American cultural and intellectual history, drawing a vivid picture of the country in the 1960s. We see a nation grappling with its own military history, a society undergoing significant shifts in its culture and identity, and a film industry in transition from Old Hollywood's big-budget runaway studio films to the slow interior cinema of New Hollywood. Dreams of Flight combines this context with fan anecdotes and a close study of filmic style to bring readers into the film and trace its wide-reaching influence. Polan examines the production history, including prior adaptations in radio and television of celebrated author Paul Brickhill's original nonfiction book about the escape, and he compares the cinematic fiction to the real events of the escape in 1944. Dreams of Flight also traces the afterlife of The Great Escape in the many subsequent movies, TV commercials, and cartoons that reference it, whether reverentially or with humor.

Dana Polan is Professor of Cinema Studies at New York University. His previous books include The LEGO Movie and Scenes of Instruction: The Beginnings of the U.S. Study of Film.

"Dana Polan’s rich assessment of the film’s making coupled with a superb analysis of the film itself, script, style, themes and directorial bravura is filled with informative nuggets. Eschewing the standard star bio approach, Polan goes much deeper. . . . Written with tremendous authority and great style."—Cinema Retro

“Dreams of Flight is an act of devotion, a work of extreme connoisseurship.”

"Snappy and engaging but also intellectually rigorous. Offers a thoughtful critique of a well-remembered (but rarely studied) film and uses its analysis to offer deeper insights into American culture in the 1960s."—Patrick Keating, author of The Dynamic Frame: Camera Movement in Classical Hollywood

"Dana Polan makes a powerful case for The Great Escape's prominence within the generic evolution and the larger sweep of motion-picture history, leaving no stones unturned in his exhaustive research and painstaking analysis."—Noah Isenberg, author of Edgar G. Ulmer: A Filmmaker at the Margins

1. Engineering The Great Escape
From Book to Film (and In Between)

2. Tunneling In
The Great Escape: Style, Theme, and Structure