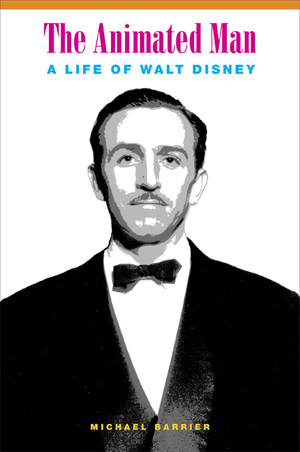 The Animated Man A Life of Walt Disney

Walt Disney (1901-1966) was one of the most significant creative forces of the twentieth century, a man who made a lasting impact on the art of the animated film, the history of American business, and the evolution of twentieth-century American culture. He was both a creative visionary and a dynamic entrepreneur, roles whose demands he often could not reconcile.

In his compelling new biography, noted animation historian Michael Barrier avoids the well-traveled paths of previous biographers, who have tended to portray a blemish-free Disney or to indulge in lurid speculation. Instead, he takes the full measure of the man in his many aspects. A consummate storyteller, Barrier describes how Disney transformed himself from Midwestern farm boy to scrambling young businessman to pioneering artist and, finally, to entrepreneur on a grand scale. Barrier describes in absorbing detail how Disney synchronized sound with animation in Steamboat Willie; created in Snow White and the Seven Dwarfs sympathetic cartoon characters whose appeal rivaled that of the best live-action performers; grasped television’s true potential as an unparalleled promotional device; and—not least—parlayed a backyard railroad into the Disneyland juggernaut.

Based on decades of painstaking research in the Disney studio’s archives and dozens of public and private archives in the United States and Europe, The Animated Man offers freshly documented and illuminating accounts of Disney’s childhood and young adulthood in rural Missouri and Kansas City. It sheds new light on such crucial episodes in Disney’s life as the devastating 1941 strike at his studio, when his ambitions as artist and entrepreneur first came into serious conflict.

Beginning in 1969, two and a half years after Disney’s death, Barrier recorded long interviews with more than 150 people who worked alongside Disney, some as early as 1922. Now almost all deceased, only a few were ever interviewed for other books. Barrier juxtaposes Disney’s own recollections against the memories of those other players to great effect. What emerges is a portrait of Walt Disney as a flawed but fascinating artist, one whose imaginative leaps allowed him to vault ahead of the competition and produce work that even today commands the attention of audiences worldwide.

Michael Barrier founded and edited Funnyworld, the first serious magazine devoted to animation and the comics. He is the author of Hollywood Cartoons: American Animation in Its Golden Age (1999).

“I frequently find myself perusing The Animated Man with a regularity that keeps it almost constantly residing near my desk. It is rare that I cannot find what I am looking for within its pages. . . . It [The Animated Man] is an effort that deserves to be recognized as a valuable and important contribution to the library of Disney history.”—Jeff Pepper 2719 Hyperion

“Barrier's telling of the Disney legend is by far the most straightforward ever published.”—Martin Goodman Animation World Magazine

“I have always believed, and recently increasingly believe, that Walt Disney was one of the most important entrepreneurs of our time. One of the most favorably reviewed biographies of Disney is Michael Barrier’s The Animated Man.”—Artdiamondblog.com

“The book is lively, detailed and revealing of a man with many, many sides.”—Blue Ridge Business Journal

“ Michael Barrier’s The Animated Man: A Life of Walt Disney is one of two recent biographies released on Disney. . . . I think most animation buffs will go straight to Barrier’s book. Barrier has been researching animation for decades: he started interviewing important figures in the industry in the late sixties, and was publishing serious scholarly writing on the subject from around the same time in his magazine Funnyworld. Barrier’s research in the field therefore started decades ahead of most writers who now write on the subject, and there is certainly nobody who can match the breadth of research and longevity of serious writing in the field.”—Stephen Rowley Cinephobia

“Barrier is one of the few thoughtful critic-historians to have taken a serious interest in animation, and The Animated Man is a superbly penetrating piece of work. . . . The Animated Man tells you everything you need to know about Walt Disney and his work. I recommend it wholeheartedly.”—Terry Teachout Commentary

“A compelling psychological portrait of Walt, through the observations of the animators.”—Mark Greif London Review Of Books

“I enjoy the jolts of intelligent debate he [Barrier] stirs up regarding a subject too often smothered in mindless adoration or tarnished by equally mindless speculation. He presents hard facts about a real and complex man, and unapologetically offers his personal assessment of those facts. For those interested in joining the debate, I highly recommend this book.”—John Canemaker Print

“Animated Man is the book I've always wanted to read on Disney the person, and the one that I've enjoyed the most (of the two recently released and the previous few). . . . It's a must-have.”—Jennifer Lerew The Blackwing Diaries

“A wonderful new book. . . . In portraying the entrepreneurial side of Disney along with his vision and personality, Barrier has seamlessly merged the public and private personas of a man whose company has inspired countless generations of children and adults.”—Virginia Qtly Review

“I've read a handful of biographies on Walt Disney over the years and I can say with certainty that Michael Barrier's new book, The Animated Man: A Life of Walt Disney is the very best. . . . Pick up this book today! It's your summer read.”—Www.asifaeast.com

“Though Neal Gabler’s massive Walt Disney: The Triumph of The American Imagination was hailed as the definitive biography of one of the 20th century’s most fascinating personalities, it’s animation historian Michael Barrier’s much more concise and researched The Animated Man: A Life of Walt Disney that truly deserves the title. Utilizing almost 40 years worth of his own personal interview archives, and those of associates, he presents a much more accurate representation of a complicated creative visionary and businessman as a regular human being full of quirks, foibles, failings, and genius that never falls prey to any of the prevailing myths and clichés that have attached themselves to Disney like barnacles over the years.”—Www.quickstopentertainment.com

"This book is important not just as a biography, but also as a cultural history that provides great insight to one of the best-known creative minds of the twentieth century. Barrier's engaging and highly informative writing style offers excellent perspective on how much changed in the world of animated cartoons during Disney's lifetime, and just how much the Disney studio brought about these changes. The remarkable quantity of first-person accounts, interviews, and other primary evidence is one of the book's most important attributes. This biography chronicles Disney's life while keeping in view the technological and stylistic developments in animation and filmmaking that Disney helped bring about. Barrier's deft navigation of a wide variety of historical streams gives Animated Man a uniquely comprehensive and compelling story about Walt Disney."—Daniel Goldmark, author of Tunes for 'Toons: Music and the Hollywood Cartoon

"Michael Barrier's biography of Walt Disney is impressive, with a remarkable range of interviews. I was fascinated to see this mysterious world laid out as an industrial process—somehow, this makes what we see on the screen even more miraculous."—Kevin Brownlow, Director, Cecil B De Mille: American Epic and Garbo

"The Animated Man is by far the best critical study to date of Walt Disney and his worlds: corporate, personal, ideological, architectural. Michael Barrier's years of discussion with Disney's collaborators and family members make for a richly textured discussion of a figure often dismissed by the scholarly community as a vulgarian of the worst sort. Barrier shows us a tireless innovator, a man of deep feeling, a true American original who has woven himself into the very fabric of modern culture."—Karal Ann Marling, editor, Designing Disney's Theme Parks: The Architecture of Reassurance

7 “Caprices and Spurts of Childishness”
Escaping from Animation, 1947–1953

Afterword: “Let’s Never Not Be a Silly Company”
Notes
Index