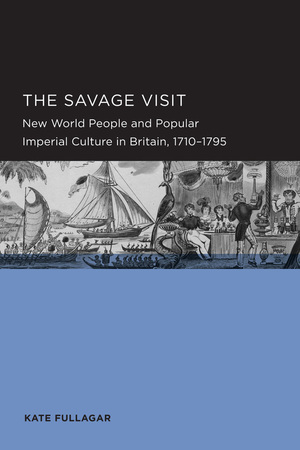 In eighteenth-century Britain, the appearance of “savages” from the New World provoked intense fascination. Though such people had been arriving periodically for decades, it was only then that the “savage visit” became a sensation. Using a wealth of sources, Kate Fullagar shows why the phenomenon grew and how it related to bitter debates over the morality of imperial expansion.

Kate Fullagar is Lecturer in Modern History at Macquarie University.

“This is a beautifully written and thoroughly engaging account of the rise and fall of the ‘savage visit’ as a focus of cultural interest in Britain in the eighteenth century. It is a fascinating topic, and its treatment here is both intellectually impressive and hugely appealing.”—Harriet Guest, University of York

“Kate Fullagar’s book does nothing less than put its topic into a new frame. The tumultuous reception that these visitors received indexes what exoticism meant, or, more particularly, what the stories of these visitors meant in the cultural and political conjunctures of the moment. As Fullagar very ably demonstrates, the most contentious issues revolved around war and empire: Was a society constituted around trade and commerce legitimate, if from trade and commerce war and empire inevitably followed?”—Nicholas Thomas, University of Cambridge

1. The New World in England before the Eighteenth Century
2. Four from Iroquoia: The Appeal of Savagery
3. Seven from the Cherokee, Nine from the Creeks
4. Ostenaco and the Losing of America
5. Passing the Mantle: From America to Oceania
6. Mai and the Finding of Oceania
7. Palauans, Hawaiians, Tahitians: Diminishing Oddities
8. Bennelong from Resnullius: The Decline of Savagery