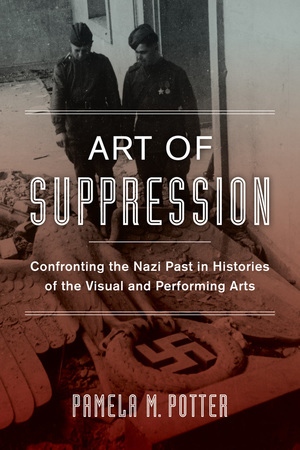 This provocative study asks why we have held on to vivid images of the Nazis’ total control of the visual and performing arts, even though research has shown that many artists and their works thrived under Hitler. To answer this question, Pamela M. Potter investigates how historians since 1945 have written about music, art, architecture, theater, film, and dance in Nazi Germany and how their accounts have been colored by politics of the Cold War, the fall of communism, and the wish to preserve the idea that true art and politics cannot mix. Potter maintains that although the persecution of Jewish artists and other “enemies of the state” was a high priority for the Third Reich, removing them from German cultural life did not eradicate their artistic legacies. Art of Suppression examines the cultural histories of Nazi Germany to help us understand how the circumstances of exile, the Allied occupation, the Cold War, and the complex meanings of modernism have sustained a distorted and problematic characterization of cultural life during the Third Reich.

Pamela M. Potter is Professor of German at the University of Wisconsin-Madison, author of Most German of the Arts: Musicology and Society from the Weimar Republic to the End of Hitler’s Reich, and coeditor of Music and German National Identity.

“[Potter’s] book unquestionably provides a ground-breaking historiographic foundation for understanding the mechanisms that stood behind the descriptions and analyses of the Third Reich and the cultural and artistic life of the Nazi state….She raises significant questions related to myths about the unrestricted power of authoritarian and dictatorial regimes in all matters related to culture. And, most important, she hints at anti-democratic, authoritarian trends found in liberal and Western societies today where cultural life is ostensibly immune to intervention and coercion.”—Ha’aretz

“Pamela M. Potter’s excellent critical historiography boldly breaks down the barriers between the disciplines of music history, theater and film history, and art history to show how the historiography on culture during the Nazi period produced blind spots and distortions that are still in fundamental need of correction.”—Paul B. Jaskot, author of The Nazi Perpetrator: Postwar German Art and the Politics of the Right

“In this pathbreaking work, Potter challenges old, well-worn assumptions regarding the creation and consumption of culture. Her book is indispensable for a thorough understanding of culture in Germany, from the Weimar Republic through the Third Reich and the early decades of West and East Germany.”—Michael H. Kater, author of Weimar: From Enlightenment to the Present


“Potter’s brilliant and wide-ranging study is both a new interpretation of culture during the Third Reich and an original analysis of the historiography of the postwar period. She shows how the arts in many respects flourished in Nazi Germany, and how this was viewed by most postwar scholars as an ‘inconvenient’ reality. Authoritative and original, this book is a tour de force.”—Jonathan Petropoulos, author of Artists under Hitler: Collaboration and Survival in Nazi Germany

“Potter has deftly integrated cultural history and critical historiography into a compelling study that should be read by all students and scholars interested in Nazi Germany and the relationship between art and politics in twentieth-century Europe.”—Alan E. Steinweis, author of Art, Ideology, and Economics in Nazi Germany: The Reich Chambers of Music, Theater, and the Visual Arts