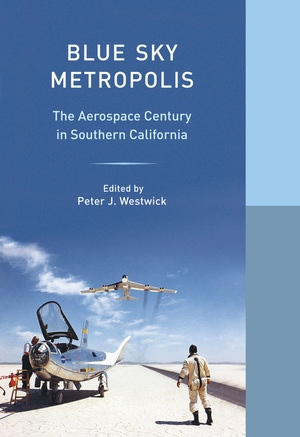 Why did Southern California become the aerospace capital of the world? What were the consequences of this development for the region, for the nation, and for aerospace itself? Featuring essays by a multidisciplinary group of leading scholars and writers, this volume investigates the intersection of aerospace and Southern California through the lenses of anthropology, history of science and technology, labor, business, ethnicity and gender, architecture, and the environment.

Peter J. Westwick is an assistant professor of history at the University of Southern California and director of the Aerospace History Project, an initiative of the Huntington-USC Institute on California and the West.

"Every essay in this book hits the mark ... [they] set a high standard for anyone who wishes to pursue the subject."—Banding Iron

"...the collection’s essays contribute much to the history of southern California, the aerospace industry, innovations in science and technology, and the American West."—Southern California Quarterly

"Like citrus, oil, movies, radio, and television, aerospace helped create Southern California and embody its values. Blue Sky Metropolis launches an entirely fresh consideration of an iconic industry that answered the immemorial hunger of the human race for flight and the future."--Kevin Starr, University of Southern California

"Blue Sky Metropolis presents an intriguing survey of a unique time in Southern California history, when cheap land and benign weather lured massive aerospace enterprises to the region—eventually serving as home to nearly half of the nation’s defense and space fabricators. Before there was a Silicon Valley, high-tech dreamers were on the loose in the Southland, creating inventions as diverse as the Voyager planetary spacecraft and the Stealth bomber. These highly readable essays help us understand how it happened—how Southern California shaped aerospace, and vice versa."—Charles Elachi, Director, Jet Propulsion Laboratory

"Peter Westwick has assembled a rich collection of essays that tell a wonderful story about the importance of the aerospace industry to Southern California and the importance of Southern California to the aerospace industry. There's technology, sociology, economics, geography, anthropology, and much more woven through the chapters. It's an ambitious project, but it succeeds in being interesting, informative, and entertaining."—Michael Rich, President and CEO, The RAND Corporation