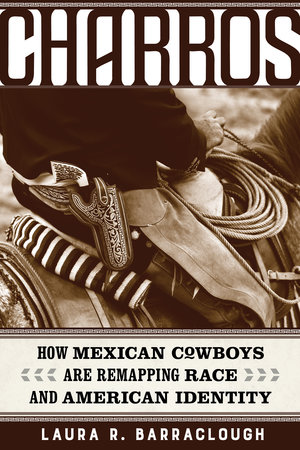 Charros How Mexican Cowboys Are Remapping Race and American Identity

In the American imagination, no figure is more central to national identity and the nation’s origin story than the cowboy. Yet the Americans and Europeans who settled the U.S. West learned virtually everything they knew about ranching from the indigenous and Mexican horsemen who already inhabited the region. The charro—a skilled, elite, and landowning horseman—was an especially powerful symbol of Mexican masculinity and nationalism. After the 1930s, Mexican Americans in cities across the U.S. West embraced the figure as a way to challenge their segregation, exploitation, and marginalization from core narratives of American identity. In this definitive history, Laura R. Barraclough shows how Mexican Americans have used the charro in the service of civil rights, cultural citizenship, and place-making. Focusing on a range of U.S. cities, Charros traces the evolution of the “original cowboy” through mixed triumphs and hostile backlashes, revealing him to be a crucial agent in the production of U.S., Mexican, and border cultures, as well as a guiding force for Mexican American identity and social movements.

Laura R. Barraclough is the Sarai Ribicoff Associate Professor of American Studies at Yale University. She is the author of Making the San Fernando Valley: Rural Landscapes, Urban Development, and White Privilege and coauthor of A People’s Guide to Los Angeles.

"This innovative book . . . presents a particularly insightful intervention into [the debate over American national identity]."—Journal of Historical Geography

"Barraclough has done a highly effective job in telling this story, as well as providing a template for other such research projects."—Journal of Arizona History

"A fresh perspective that steers away from traditional historiographic approaches and joins the nascent literature on Mexican American and southwestern history."—Southwestern Historical Quarterly

“A masterfully written study, alert to the operation of space and power in the dynamics of race, nation, and identity. The author captures historical moments and debates with elegance, staging insightful interventions in established narratives.”—Natalia Molina, author of How Race Is Made in America: Immigration, Citizenship, and the Historical Power of Racial Scripts

“There’s nothing more American than the cowboy and more Mexican than the charro. With great imagination and meticulous research, Laura Barraclough shows what the intersection between the two reveals about the shifting grounds of U.S./Mexican ethnic masculinity and nationalism from the 1920s to the present.”—Sarah Deutsch, author of Women and the City: Gender, Space, and Power in Boston, 1870–1940


“This remarkable book moves from California to Colorado to Texas, and from the 1940s to the present, to reconceptualize ethnic Mexican history, urban and rural geographies, and the ways that we think about class and racial formations, colonial legacies, masculinity and gender expression, debates about animal welfare and immigrant rights, and more.”—Stephen J. Pitti, author of The Devil in Silicon Valley: Northern California, Race, and Mexican Americans
Read More >