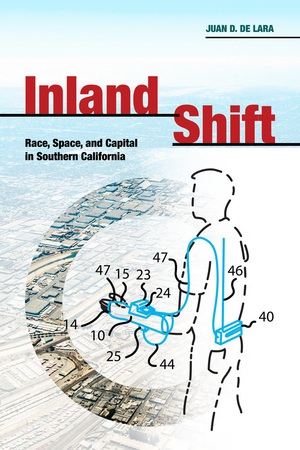 The subprime crash of 2008 revealed a fragile, unjust, and unsustainable economy built on retail consumption, low-wage jobs, and fictitious capital. Economic crisis, finance capital, and global commodity chains transformed Southern California just as Latinxs and immigrants were turning California into a majority-nonwhite state. In Inland Shift, Juan D. De Lara uses the growth of Southern California’s logistics economy, which controls the movement of goods, to examine how modern capitalism was shaped by and helped to transform the region’s geographies of race and class. While logistics provided a roadmap for capital and the state to transform Southern California, it also created pockets of resistance among labor, community, and environmental groups who argued that commodity distribution exposed them to economic and environmental precarity.

Juan D. De Lara is Assistant Professor of American Studies and Ethnicity at the University of Southern California and an Affiliate Researcher at its Program for Environmental and Regional Equity. His research interests include the working poor, social movements, urbanization, and social justice.

"A stunning exploration of the logistics mega-complex in Southern California's Inland Empire that is the single most important material expression of the globalization of the U.S. economy. Here the tsunami of imports from East Asia joins the stream of labor and products from Mexico for continental distribution to the big-box retail economy where we all shop. In scores of interviews with warehouse workers and local residents, Juan D. De Lara reconstructs the politics of labor and race in the ultimate world of commodities."—Mike Davis, author of City of Quartz: Excavating the Future in Los Angeles

"Juan D. De Lara’s beautifully written and judiciously argued study shows how the general processes of globalization have reworked Southern California’s Inland Empire. The book details the dialectics of race and space and the territorial consolidation—through difference—of certain kinds of power. Beyond insisting on the necessity to organize against racial capitalism’s contemporary shape and structure, De Lara reveals the regionally specific ground from which today’s labor movement can and must develop and flourish. His work models what militant scholarship should be: theoretically sound, analytically brave, empirically robust."—Ruth Wilson Gilmore, author of Golden Gulag: Prisons, Surplus, Crisis, and Opposition in Globalizing California


"In this masterfully crafted analysis of the Inland Empire’s logistics industry, De Lara sets a new standard for economic geography. Few have been able to weave race, space, and capitalism together with such nuance and insight. In his deft hands the reader can literally see how southern California's landscape of racial capitalism is forged."—Laura Pulido, author of Black, Brown, Yellow, and Left: Radical Activism in Los Angeles
Read More >

SCENE 1: A SPACE FOR LOGISTICS 9
1 • Space, Power, and Method 11
2 • Global Goods and the Infrastructure of Desire 25
3 • The Spatial Politics of Southern California’s Logistics Regime 37