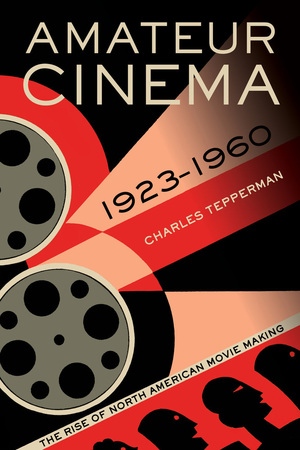 From the very beginning of cinema, there have been amateur filmmakers at work. It wasn’t until Kodak introduced 16mm film in 1923, however, that amateur moviemaking became a widespread reality, and by the 1950s, over a million Americans had amateur movie cameras. In Amateur Cinema, Charles Tepperman explores the meaning of the “amateur” in film history and modern visual culture.

In the middle decades of the twentieth century—the period that saw Hollywood’s rise to dominance in the global film industry—a movement of amateur filmmakers created an alternative world of small-scale movie production and circulation. Organized amateur moviemaking was a significant phenomenon that gave rise to dozens of clubs and thousands of participants producing experimental, nonfiction, or short-subject narratives. Rooted in an examination of surviving films, this book traces the contexts of “advanced” amateur cinema and articulates the broad aesthetic and stylistic tendencies of amateur films.

Charles Tepperman is Assistant Professor of Film Studies at the University of Calgary.

"A very welcome, and much needed, addition to this literature.'—The Moving Image

"A valuable history of the amateur films movement, its production practices, and how groups “professionalized” around amateur film journals. It makes fascinating contributions to US cultural/social history in its discussion of middle class practices and aesthetics, and of the middle class's view of its world. Recommended to historians trying to understand middle class culture’s journey across mid-century."—Kathryn Fuller-Seeley, author of At the Picture Show: Small Town Audiences and the Creation of Movie Fan Culture

"The first detailed history of amateur filmmaking in the US draws on rich archival materials including extant film prints and journals. Tepperman's study marks the evolution of amateur filmmaking as a “creative response” to Hollywood’s increasingly hegemonic aesthetic, technological, industrial and business practices. Amateur Cinema adds enormously to the growing body of research on “non-theatrical” cinema."—Shelley Stamp, author of Lois Weber in Early Hollywood

"Despite the number of practitioners and the large number of works they made, very little scholarship has focused on amateur cinema. Charles Tepperman's close reading of published and unpublished sources not only vivifies the untold history of amateur cinema, but mobilizes the history and aesthetics of amateur cinema as a wedge to consider complex aspects of cinema as a whole, especially the reception/production spectrum, the nature and incubation of technical innovation, and the practices of personal mediamaking, mashups and remix."—Rick Prelinger, founder of Prelinger Archives and Associate Professor of Film & Digital Media, UC Santa Cruz