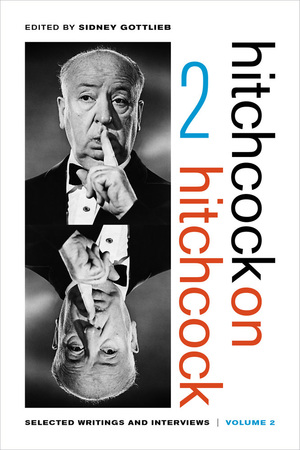 This second volume of Alfred Hitchcock’s reflections on his life and work and the art of cinema contains material long out of print, not easily accessible, and in some cases forgotten or unknown. Edited by Sidney Gottlieb, this new collection of interviews, articles with the great director's byline, and “as-told-to” pieces provides an enlivening perspective on a career that spanned seven decades and transformed the history of cinema.

In writings and interviews imbued with the same exuberance and originality that he brought to his films, Hitchcock ranges from accounts of his own life and experiences to provocative comments on filmmaking techniques and cinema in general. Wry, thoughtful, witty, and humorous—as well as brilliantly informative and insightful—this volume contains much valuable material that adds to our understanding and appreciation of a titan who decades after his death remains one of the most renowned and influential of all filmmakers.

François Truffaut once said that Hitchcock “had given more thought to the potential of his art than any of his colleagues.” This profound contemplation of his art is superbly captured in the pieces from all periods of Hitchcock’s career gathered in this volume, which reveal fascinating details about how he envisioned and attempted to create a “pure cinema” that was entertaining, commercially successful, and artistically ambitious and innovative in an environment that did not always support this lofty goal.

Sidney Gottlieb is Professor of Communication and Media Studies at Sacred Heart University in Fairfield, Connecticut. He coedits (with Richard Allen) the Hitchcock Annual, and his books include Hitchcock on Hitchcock: Selected Writings and Interviews, Volume 1; Alfred Hitchcock: Interviews; and Roberto Rossellini’s “Rome Open City.”

"For the more strictly cinematic sort of genius which everyone agrees Hitchcock had, the best bet [is] the volume by Gottlieb,"—Claremont Review of Books

"Who knew there was so much more intriguing material waiting to be gathered for Volume Two of Hitchcock on Hitchcock? Gottlieb has done a splendid job of searching down and intelligently introducing rare, often surprising items, including Hitchcock's early fiction, missing elements from his published conversations with Truffaut, and several of his little-known, nuanced essays on the craft of film making. Volume Two is a pleasure to read and a gift to anyone interested in the great director's career."—James Naremore, author of An Invention without a Future: Essays on Cinema

Praise for Volume 1:
"The essays, interviews and speeches in this collection make clear that [Hitchcock] enjoyed playing the role of God: in planning and executing his films, he relished the power he exerted as an all-powerful auteur. . . . Hitchcock on Hitchcock provides some telling self-portraits of the director. Almost every piece . . . contains an interesting nugget of technical information, or one or two anecdotal truffles."—Michiko Kakutani, New York Times


"Simply having this much out-of-the-way material at one's fingertips makes this a must for Hitchcock scholars.... This us an editing job worthy of the director himself." —Ina Ray Hark, Hitchcock Annual

"This is a book for anyone interested in Hitchcock the man and the—yes—artist; but also for those concerned with the history of British and American cinema, and with how these films, or some of their famous scenes, were made; and, at least intermittently, for those who fancy a good anecdone, a bit of tart humour, some iconoclastic views, and many fine insights into art and life—along with others of a more dubious nature." —John Simon, Times Literary Supplement
Read More >