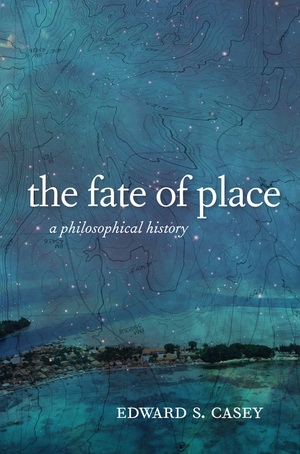 The Fate of Place A Philosophical History

In this imaginative and comprehensive study, Edward Casey, one of the most incisive interpreters of the Continental philosophical tradition, offers a philosophical history of the evolving conceptualizations of place and space in Western thought. Not merely a presentation of the ideas of other philosophers, The Fate of Place is acutely sensitive to silences, absences, and missed opportunities in the complex history of philosophical approaches to space and place. A central theme is the increasing neglect of place in favor of space from the seventh century A.D. onward, amounting to the virtual exclusion of place by the end of the eighteenth century.

Casey begins with mythological and religious creation stories and the theories of Plato and Aristotle and then explores the heritage of Neoplatonic, medieval, and Renaissance speculations about space. He presents an impressive history of the birth of modern spatial conceptions in the writings of Newton, Descartes, Leibniz, and Kant and delineates the evolution of twentieth-century phenomenological approaches in the work of Husserl, Merleau-Ponty, Bachelard, and Heidegger. In the book's final section, Casey explores the postmodern theories of Foucault, Derrida, Tschumi, Deleuze and Guattari, and Irigaray.

Edward Casey is Professor of Philosophy at the State University of New York at Stony Brook. His most recent work is Getting Back into Place (1993).

"Edward Casey has written a brilliant, elegant, and meticulously thorough analysis of the 'hidden history of place' . . . destined to become the standard reference for all those interested in rethinking space, place, location, and containment."—Elizabeth Grosz, author of Volatile Bodies: Toward a Corporeal Feminism

"The problem of 'place' and 'space' is a crucial one and its lineage in western philosophy has never been traced with such commanding clarity as in Edward Casey's work. Encyclopedic in range, it is also a splendidly informative book, full of insights and surprises."—Anders Stephanson, Columbia University

"This book's historical scope is breathtaking; its historical scholarship is prodigious."—David M. Levin, editor of Modernity and the Hegemony of Vision

"Focusing on the body as a route to recovering a sense of place . . . this book enables us to 'join' the supposed poles of realism and idealism, objectivity and subjectivity, sociality and individuality. Scholars will find Casey's work highly stimulating and groundbreaking in many ways."—Lawrence Hatab, author of Myth and Philosophy