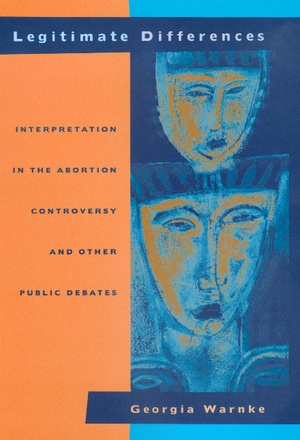 Legitimate Differences Interpretation in the Abortion Controversy and Other Public Debates

Debates over such issues are not, Georgia Warnke argues, moral debates over which principles we should adopt. Rather, they are interpretive debates over the meanings of principles we already possess. Warnke traces the structure of these debates with reference to the work of Jane Austen, Hans-Georg Gadamer, Jürgen Habermas, and Bernard Williams. In separate chapters on surrogate mothering, affirmative action, abortion, and pornography she articulates new understandings of the meanings of some of our principles and shows the equal legitimacy of some different interpretations of the meanings of others. Finally, she suggests that the orientation of American public policy ought to be directed less at finding single canonical interpretations of our principles than at accommodating different legitimate understandings of them. The perspective offered by Legitimate Differences should have a significantly beneficial effect on public discussions.

Georgia Warnke is Professor of Philosophy at the University of California, Riverside. She is the author of Gadamer: Hermeneutics, Tradition, and Reason (1987) and Justice and Interpretation (1993).

"Warnke's analyses of various issues of public policy are sensible and illuminating. . . . While the practical issues with which she is concerned have been discussed endlessly, she articulates and elaborates in helpful detail a surprisingly fresh and invigorating point of view."—Harry Frankfurt, Princeton University

"Georgia Warnke has a genuine talent for arguing through very complex questions, addressing the strongest positions on both sides; she is a prime example of her own theory at work!"—Michael Walzer, Institute for Advanced Study