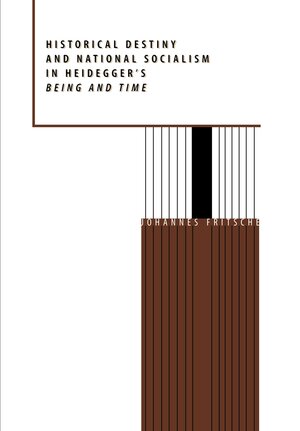 There has been much debate over the relationship of Heidegger's philosophy—in particular his book Being and Time—to his practical involvement with National Socialism. Yet the question has never been addressed through a comparison of Being and Time with other texts on history and politics written at the time. Johannes Fritsche does this, providing a detailed interpretation of the relevant passages in Being and Time—especially sections 72-77 on fate, community, and society. He analyzes for comparison two other authors who explicitly regarded themselves as rightists—Adolf Hitler (Mein Kampf) and Max Scheler (Formalism in Ethics and other writings)—and two authors on the left—Georg Lukács (History and Class Consciousness) and Paul Tillich (The Socialist Decision).

Fritsche concludes that Being and Time is a brilliant summary of right-wing politics in general, which proposes the destruction of liberal society in order to regenerate an idealized community. In addition, Heidegger rejects positions on the right, such as Scheler's, that enabled their authors to distance themselves from the most extreme political rightists, and thus he paves the way for National Socialism. Being and Time, Fritsche demonstrates, must be seen as a clear case for the National Socialists and their project of revitalization of the Volksgemeinschaft, the community of the people.

Johannes Fritsche, who received his Ph.D. and taught philosophy in Berlin, also taught at the Graduate Faculty of the New School for Social Research in New York.

"Fritsche's book, which is closely researched, carefully argued, and philologically rigorous, will become an indispensable point of reference for further debates on Heidegger's ambiguous political and ethical legacy."—Richard Wolin, author of The Politics of Being

"Unquestionably, Fritsche has a highly unusual command of the Heideggerian idiom, which he uses to very good effect."—Tom Rockmore, author of On Heidegger's Nazism and Philosophy