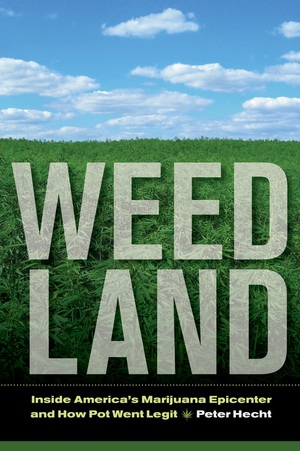 Early in the morning of September 5, 2002, camouflaged and heavily armed Drug Enforcement Administration agents descended on a terraced marijuana garden. The DEA raid on the Wo/Men’s Alliance for Medical Marijuana, a sanctuary for severely ill patients who were using marijuana as medicine, is the riveting opening scene in Weed Land, an up-close journalistic narrative that chronicles a transformative epoch for marijuana in America.

From the 1996 passage of California’s Proposition 215, the nation’s first medical marijuana law, through law enforcement raids, clinical studies that revealed medical benefits for cannabis, and the emergence of a lucrative cannabis industry, Weed Land reveals the changing political, legal, economic, and social dynamics around pot. Peter Hecht, an award-winning journalist from The Sacramento Bee, offers an independent, meticulously reported account of the clashes and contradictions of a burgeoning California cannabis culture that stoked pot liberalization across the country.

Peter Hecht is a senior writer for The Sacramento Bee. His reporting on the marijuana phenomenon was honored in the Best of the West journalism awards and earned an Excellence in Journalism prize from the Northern California chapter of the Society of Professional Journalists.

"With journalistic bravura, Sacramento Bee reporter Hecht captures California’s odyssey to legalize marijuana with immediacy, personality, and objectivity. . . . Hecht’s cautionary and deftly written account is an animated examination of how too much, too soon, almost doomed a movement."—Publishers Weekly

"In the right hands, nonfiction can be more compelling than fiction. . . . [Hecht] presents a definitive, dramatic chronology of pot and the people who research it, grow it, sell it, use it and regulate it."—Allen Pierleoni Sacramento Bee

"Peter Hecht, a journalist at The Sacramento Bee, charts the evolution of California’s medical marijuana law, the first in the nation."—Jerome Groopman New York Review of Books

"A comprehensive and compelling report on the weed wars still raging across the country."—Kirkus Reviews

"Weed Land contains in-depth personal histories of those at the heart of the marijuana industry and law-reform movement in California. Hecht tells the protagonists' compelling stories with care in his well-written and well-researched work."
—Sam Kamin, professor and director, Constitutional Rights and Remedies Program, University of Denver Sturm College of Law


"In this powerful account, Hecht reveals the origins of the modern medical cannabis movement and explores how it evolved from a small cadre of seriously ill patients, concerned doctors, and compassionate caregivers to an annual multibillion-dollar 'recreational industry.'"
—Jed Riffe, producer and director of Waiting to Inhale: Marijuana, Medicine, and the Law

"Weed Land documents the Wild West culture of California's marijuana industry on a journey from Hollywood to Humboldt, along with the hippies, healers, and hucksters who are changing American culture and politics. It's essential reading for anyone who is a fan of California's most lucrative agricultural product."
—Dale Maharidge, author of And Their Children After Them, winner of the 1990 nonfiction Pulitzer Prize

"Hecht artfully weaves together the whole history of the modern medical marijuana movement in California. Weed Land is an extremely engaging and satisfying read."
—Isaac Campos, Associate Professor of History, University of Cincinnati, and author of Home Grown: Marijuana and the Origins of Mexico's War on Drugs

"The movement to legalize pot is in full swing, and if you want to understand how we got here, Peter Hecht's impressive Weed Land is the book to read. He's covered the story as thoroughly as any journalist in the country, and it shows."
—Gary Delsohn, chief speech writer to California governor Arnold Schwarzenegger from 2006-2009, and author of The Prosecutors:A Year in the Life of a District Attorney's Office
Read More >

1. The Way It Was Supposed to Be
2. Oaksterdam
3. Kush Rush
4. Reefer Research
5. The Pot Docs
6. L.A. Excess
7. Wafting Widely
8. Courting Compassion
9. Martyrdom for the Missionaries
10. Campaign for Cannabis
11. A Mile High and Beyond
12. Cultivating Trouble
13. Return of the Feds
14. Back to the Garden