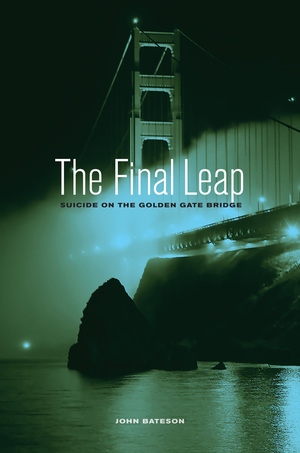 The Final Leap Suicide on the Golden Gate Bridge

“The appearance of the publication of this sensitive and humane apologia signifies the continuing struggle for maturity and depth in an American civilization capable of creating such a breathtaking path of sculptured steel across the entrance to a bay and a city so evocative of life.”—San Francisco Chronicle

“The appearance of the publication of this sensitive and humane apologia signifies the continuing struggle for maturity and depth in an American civilization capable of creating such a breathtaking path of sculptured steel across the entrance to a bay and a city so evocative of life.”—Salt Lake Tribune

“Compelling. . . . The Final Leap is a highly readable book . . . [and] is accessible to a wide range of readers. Suicide is not musicalized, it is examined as a complex behavior driven by a multitude of factors, and unique in every case.”—Tony O'Brien Metapsychology Online Review

“As a consequence of what is included, the book is a masterful blend of research and case studies. . . . It is hard not to be emotionally moved by this relatively slim volume, and it is hard not to simultaneously feel outrage and helplessness. The book is gripping, informative, maddening, and saddening, but it is something that anyone, professional or layperson, with compassion for psychological suffering will benefit from reading.”—Daniel S. Weiss Psyccritiques

“Here is the full story of why a famed structure draws folks set on death, nicely timed for the Golden Gate’s 75th anniversary.”—American History

“A wonderful addition to the literature of suicide. . . . The statistics that Bateson provides in The Final Leap are sobering. So is the vast body of literature about suicide, from Flaubert and Tolstoy to Plath, London, Hemingway, Hoffman, Ginsberg, and beyond.”—Jonah Raskin Brooklyn Rail

“The great strength of Leap is in illustrating the hundreds of lives touched by each bridge suicide: the witnesses who watch people plunge to their deaths; the Golden Gate Station Coast Guard officers who rescue the bodies — and who suffer an outsize rate of attrition because of the trauma; the coroners who perform autopsies. Bateson is a gifted writer, and he treats his subject matter in a way that manages to be uncommonly tender without ever veering into mawkishness or melodrama. But with a debate revolving around how best to address the issue, the book is as much about activism as it is about documentation: Bateson is a vociferous proponent of a suicide barrier on the bridge, and hopes that The Final Leap — which spends a great deal of time laying out, and efficiently knocking down, the arguments that have long been floated against the barrier — will raise momentum.”—East Bay Express

“A combination of manifesto and memorial, providing both a tribute to those who’ve jumped and a starting point for those who want to prevent more suicides from the Golden Gate Bridge.”—Foreword

“’The Final Leap’ should be read by everyone.”—Progressive News Daily 2.0

“Extremely well done. It’s the single most important contribution to the debate surrounding suicide and the Golden Gate Bridge to date.” -Thomas Joiner, author of Lonely at the Top and Why People Die by Suicide

“John Bateson takes us on a gripping journey through the lives of everyone who has been affected. He boldly counters myths with facts, eloquently speaks of the unspeakable, and helps us all to care about those who, in an instant, stopped caring about themselves. This book stirs the soul to fight for the day when the protective net is finally cast under the Golden Gate Bridge, when it will become a national monument to both beauty and compassion.”—John Draper, Director of the National Suicide Prevention Lifeline

7. Guardians of an Icon

B. Help and Resources