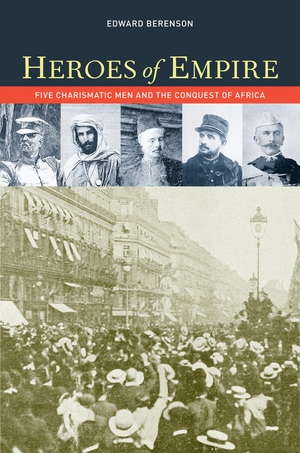 Heroes of Empire Five Charismatic Men and the Conquest of Africa

During the decades of empire (1870–1914), legendary heroes and their astonishing deeds of conquest gave imperialism a recognizable human face. Henry Morton Stanley, Pierre Savorgnan de Brazza, Charles Gordon, Jean-Baptiste Marchand, and Hubert Lyautey all braved almost unimaginable dangers among “savage” people for their nation’s greater good. This vastly readable book, the first comparative history of colonial heroes in Britain and France, shows via unforgettable portraits the shift from public veneration of the peaceful conqueror to unbridled passion for the vanquishing hero. Edward Berenson argues that these five men transformed the imperial steeplechase of those years into a powerful “heroic moment.” He breaks new ground by linking the era’s “new imperialism” to its “new journalism”—the penny press—which furnished the public with larger-than-life figures who then embodied each nation’s imperial hopes and anxieties.

Edward Berenson is Professor of History and Director of the Institute of French Studies at New York University. He is the author of Populist Religion and Left-Wing Politics in France and The Trial of Madame Caillaux (UC Press).

“An utterly enthralling and elegantly-crafted work which grips from its arresting opening sentence.”—Journal Of African History

“Berenson adds to the growing body of literature on African colonialism that refutes the old theory of “public indifference” toward British and French expansion. . . . recommended for students and scholars of African colonial history, as well as for those who like to read about adventurers in Africa.”—Jason Martin Library Journal

“Berenson’s writing style is easily accessible to all levels of study, making this a valuable addition for teaching and research.”—Rachel K. Bright Victorian Poetry

"This intriguing and beautifully written book offers a fresh analysis of Europe's age of empire, and a disquieting account of the role the mass media played in promoting colonial conquest."—Mary Dewhurst Lewis, author of The Boundaries of the Republic: Migrant Rights and the Limits of Universalism in France, 1918-1940

"There are no competing works. Specialists of both the French and English empires, and of imperialism in general, will welcome this book most enthusiastically. This is story telling at its very best."—Alice L. Conklin, author of A Mission to Civilize: The Republican Idea of Empire in France and West Africa, 1895-1930

"Edward Berenson's absorbing and fascinating book explores the culture of imperialism by examining the powerful emotional connections that the British and French forged with their heroes. Whether it was as the embodiments of Christian chivalry or as the standard bearers of the civilizing process, imperial heroes were seen as possessing superhuman courage, adventure and idealism. The work is all the more powerful because he examines this emotional chemistry without ever losing sight of the inescapable aggression and violence intrinsic to the imperial project."—Ruth Harris, author of Lourdes: Body and Spirit in the Secular Age

"This virtuosic narrative interlaces deep historical research with innovative epistemological exploration. Portraying five charismatic men at the height of French and British Imperialism, Berenson shows how the colonial race for Africa unfolded in a complex counterpoint of nationalist agendas, popular culture, sexual politics, and hero worship, all funneled through the penny press. His finely honed prose and crystal clear reasoning turn these multifaceted and intertwined stories into a fascinating picture of the political and social powers of persuasion developed by mass journalism in the decades between 1870 and 1914."—Annegret Fauser, author of Musical Encounters at the 1889 Paris Worlds Fair

"By following the lives—and legends—of five very different colonial figures, Edward Berenson has set a new standard for thinking about the roles played by the press, violence, masculinity, and civilization in the French and British empires. Beautifully crafted, perfectly paced, and written in an engaging style, Heroes of Empire is history writing at its finest."—J. P. Daughton, author of An Empire Divided: Religion, Republicanism, and the Making of French Colonialism, 1880-1914

1. Henry Morton Stanley and the New Journalism
2. Pierre Savorgnan de Brazza and the Making of the French Third Republic
3. Charles Gordon, Imperial Saint
4. The “Stanley Craze”
5. Jean-Baptiste Marchand, Fashoda, and the Dreyfus Affair
6. Brazza and the Scandal of the Congo
7. Hubert Lyautey and the French Seizure of Morocco 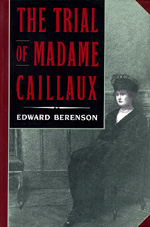 The Trial of Madame Caillaux