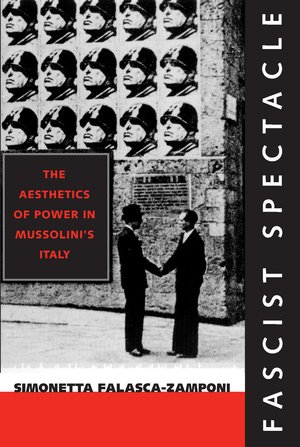 Fascist Spectacle The Aesthetics of Power in Mussolini's Italy

This richly textured cultural history of Italian fascism traces the narrative path that accompanied the making of the regime and the construction of Mussolini's power. Simonetta Falasca-Zamponi reads fascist myths, rituals, images, and speeches as texts that tell the story of fascism. Linking Mussolini's elaboration of a new ruling style to the shaping of the regime's identity, she finds that in searching for symbolic means and forms that would represent its political novelty, fascism in fact brought itself into being, creating its own power and history.

Falasca-Zamponi argues that an aesthetically founded notion of politics guided fascist power's historical unfolding and determined the fascist regime's violent understanding of social relations, its desensitized and dehumanized claims to creation, its privileging of form over ethical norms, and ultimately its truly totalitarian nature.

"An excellent contribution to the growing number of studies of Fascist political culture and public rituals."—American Journal of Sociology

"An excellent and timely book. The idea of studying Italiam fascism as a 'society of the spectacle' that used symbols, rituals, and a cult of the leader to create itself as it unfolded is a brilliant stroke."—Walter L. Adamson, author of Avant-Garde Florence: From Modernism to Fascism