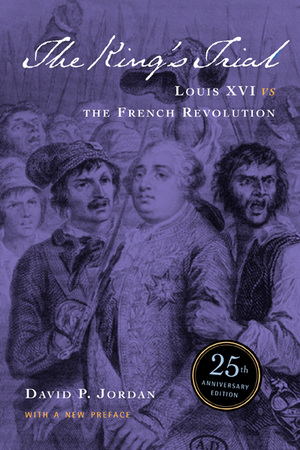 The King's Trial Louis XVI vs. the French Revolution, Twenty-fifth Anniversary Edition, With a New Preface

On August 10, 1792, Louis XVI of France abandoned his Paris chateau, walked across the Tuileries gardens, and surrendered his crown. In the tumultuous months that followed, he was tried, found guilty, and sent to the guillotine. When originally published, David Jordan's riveting account of that turbulent time identified key issues, focused attention on a matter once considered only an episode of French history, and reframed the academic debate on the meaning of the most significant trial in French history. His new preface considers the scholarship of the past twenty-five years and places The King's Trial in the current context.

David P. Jordan is the LAS Distinguished Professor of French History at the University of Illinois at Chicago. He is the author of Transforming Paris: The Life and Labors of Baron Haussmann (1995), The Revolutionary Career of Maximilien Robespierre (1985), and Gibbon and His Roman Empire (1971).

Prologue: The King's Longest Night
I. The Question of the King
II. The End of the Monarchy
III. The King Can Do No Wrong
IV. The Man of the Temple
V. The Accusation
VI. A Lawyer for the King
VII. The King's Defense
VIII. The King and Desperate Men
IX. The First Two Votes
X. The Vote on Death
XI. The King Must Die
XII. The March to the Scaffold
XIII. The Memory of a King
Epilogue

Appendix: The Third Appel Nominal
A General Note on Sources and Authorities
Index