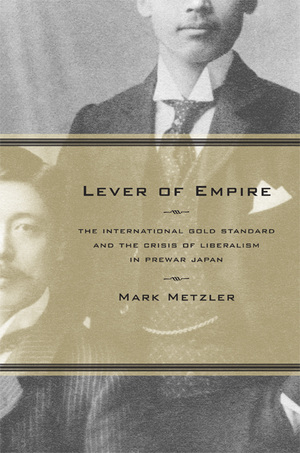 This book, the first full account of Japan’s financial history and the Japanese gold standard in the pivotal years before World War II, provides a new perspective on the global political dynamics of the era by placing Japan, rather than Europe, at the center of the story. Focusing on the fall of liberalism in Japan in late 1931 and the global politics of money that were at the center of the crisis, Mark Metzler asks why successive Japanese governments from 1920 to 1931 carried out policies that deliberately induced deflation and depression. His search for answers stretches from Edo to London to the ragged borderlands of the Japanese empire and from the eighteenth century to the 1950s, integrating political and monetary analysis to shed light on the complex dynamics of money, empire, and global hegemony. His detailed and broad ranging account illuminates a range of issues including Japan’s involvement in the economic dynamics that shook interwar Europe, the character of U.S. isolationism, and the rise of fascism as an international phenomenon.

Mark Metzler is Professor of History and Asian Studies at the University of Texas, Austin.

“Thought-provoking, intellectually curious, and at times controversial. . .Metzler has painted us a complete historical landscape, broad in focus and rich in insight. All in all, it is an exciting read that is highly recommended to anyone interested in Japan’s modern history.”—Monumenta Nipponica

"Lever of Empire is an engrossing page turner—I simply could not put it down until I had finished it. This is an important subject, and one that has not been given adequate attention in Western scholarship on Japan until now. Metzler has done thorough research, and has woven these materials together into an elegantly written whole. The result is an outstanding book."—Richard J. Smethurst, author of A Social Basis for Prewar Japanese Militarism: The Army and the Rural Community

“Metzler’s outstanding contribution goes beyond the historical information compiled so impressively in this book. …[Lever of Empire] is going to become a classic in the historiography of Japanese and world economic history.”—Arturo Giraldez, Economic History Review


“This is an outstanding book. It eloquently shows the formation of Japan’s political-economic practice, and rightfully stresses the spillover of monetary matters into both political and economic development. Students of the dollar standard or IMF policies too will find its conclusions provocative, worthwhile and compelling."—Michael Schiltz, Financial History Review

“The author has investigated a wide range of domestic and foreign primary materials and has read them most carefully. He has painstakingly compared the results that were brought to light from Japanese primary documents with the English primary documents and has done a lot of original fact finding. Moreover, the author’s perspective is quite broad both as a historian and an economic historian, his range covering everything from economic history through political and social history. …[Lever of Empire] mak[es] new contributions to the study of Japanese history and Japanese economic history as done by Japanese scholars, …we can learn a host of historical lessons about international policy cooperation and economic policies toward emerging markets.”—Itoh Masanao, Social Science Japan Journal

“Mark Metzler’s Lever of Empire accomplishes two major tasks. It presents by far the most comprehensive analysis in English of Japanese financial policy in the early twentieth century, a crucial period in which Japan began to emerge as the major industrial and military power in Asia. Perhaps even more important, Metzler crafts a masterful transnational history that examines the close interaction of Japanese domestic policies with outside forces… Along the way, the book also yields important insights into the dynamics of Japanese imperialism.”—W. Miles Fletcher, History: Reviews of New Books
Read More >