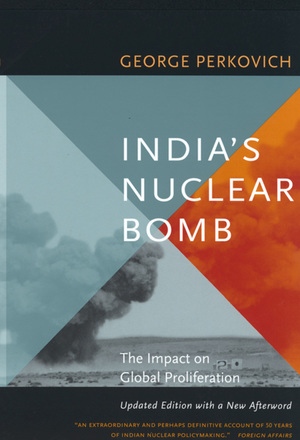 In May 1998, India shocked the world—and many of its own citizens—by detonating five nuclear weapons in the Rajasthan desert. Why did India bid for nuclear weapon status at a time when 149 nations had signed a ban on nuclear testing? What drove India's new Hindu nationalist government to depart from decades of nuclear restraint, a control that no other nation with similar capacities had displayed? How has U.S. nonproliferation policy affected India's decision making?

India's Nuclear Bomb is the definitive, comprehensive history of how the world's largest democracy, has grappled with the twin desires to have and to renounce the bomb. Each chapter contains significant historical revelations drawn from scores of interviews with India's key scientists, military leaders, diplomats and politicians, and from declassified U.S. government documents and interviews with U.S. officials. Perkovich teases out the cultural and ethical concerns and vestiges of colonialism that underlie India's seemingly paradoxical stance.

India's nuclear history challenges leading theories of why nations pursue and hang onto nuclear weapons, raising important questions for international relations theory and security studies. So, too, the blasts in Rajasthan have shaken the foundations of the international nonproliferation system. With the end of the Cold War and an even more chaotic international scene, Perkovich's analysis of an alternative model is timely, sobering, and vital.

George Perkovich is Director of the Secure World Program of the W. Alton Jones Foundation and a member of the Council on Foreign Relations and the International Institute for Strategic Studies. His work has appeared in Foreign Affairs, Foreign Policy, the Bulletin of Atomic Scientists, the Washington Post, and other publications.

"The most likely site for a nuclear war is the Indian subcontinent, but we have little understanding of India's nuclear program. This will change with George Perkovich's fascinating and important study. It is informed, free from bias, and a great read as well."—Robert Jervis, Adlai E. Stevenson Professor of International Politics, Columbia University

"George Perkovich has written a comprehensive and thoughtful book on one of the most troubling security problems of the day--the introduction of nuclear weapons to the already dangerous confrontation between India and Pakistan." —William J. Perry, Professor, Stanford University, Former US Secretary of Defense

"George Perkovich's India's Nuclear Bomb is an authoritative account in Indian decision-making. I have found no other statement as comprehensive and persuasive. It provides unique insights into Indian politics and is an invaluable contribution to American thinking about nonproliferation." —Frank G. Wisner, U.S. Ambassador to India, 1994-1997

"With a great deal of empathy and understanding of the Indian psyche, George Perkovich leads us through contradictory perceptions of events to give us a sense of the evolution of nuclear decision making in India. What emerges is a highly nuanced and sensitive narration of the complex interaction between domestic and external factors that led to the nuclear tests of May, 1998 and the shattering of a number of Indian and international myths about nuclear weapons and their role in global politics." —K. Subrahmanyam, Consulting Editor The Times of India and The Economic Times, Chairman, Indian National Security Advisory Board


"George Perkovich's book is one I wish I had written. India's Nuclear Bomb appears at a critical moment in global nuclear history, and it will have an important impact on the current policy debate in the United States, India, and Pakistan, as well as on the future histories of Indian politics and international security policy." —Stephen Cohen, Senior Fellow, Brookings Institution, Washington, DC
Read More >

ONE
Developing the Technological Base for the Nuclear Option
1948-1963

TWO
The First Compromise Shift toward a "Peaceful Nuclear Explosive"
1964

FOUR
War and Leadership Transitions at Home
AUGUST 1965-MAY 1966

SIX
Political Tumult and Inattention to the Nuclear Program
1969-1971

FIFTEEN
The Bombs That Roared
1998