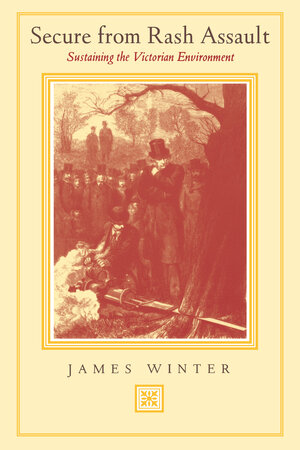 Request  an Exam or Desk Copy Recommend to Your Library (PDF) RightsLink Rights and Permissions Read an Excerpt
Chapter 5. Woods and Trees

In England ... arboriculture, the planting and nursing of trees, has, until recently, been better understood than silviculture, the sowing and training of the forest. George Perkins Marsh, Man and Nature, 1864


Extranatural power, iron machinery, artifice, railway speed, innovation, precision, synchronization, professionalism, rationalization, calculation, utility, abstractness, efficiency—these phenomena, values, and processes were what Victorians had in mind when they described their age, as they frequently did, as the age of steam. That humans could, at last, free themselves from the confines of nature—refashion environments, control climates, redirect rivers, calm torrents, adjust soil chemistry, make deserts flower, grow food out of season—prospects such as these could be exhilarating, as they obviously were to the duke of Sutherland when he sent his steam plows to transform the stony wastes of Lairg. But nature proved to be resilient there and on most high-country places. On fertile plow lands, nature submitted, agreed to form a bond with humankind, but only on the condition that her ways of life should be respected.

As for Britain's woods and copses, forests, and hedgerow trees—these felt the effect of the huge increase in demand for wood products, powerfully stimulated by iron and steam technologies. Professionals called for steam-era methods and attitudes. But no forest industry developed. Amateurism was tested but prevailed. The landscapes of open heather hillsides and patchwork fields, softened with borders of scattered hardwood trees and rounded off with hilltop copses, survived largely intact during the time when steam power became the great moving force in manufacturing and transport.

Why that should have been so is partly revealed in the history of Savernake Forest. Leased since 1938 to the Forestry Commission, this splendid preserve, which lies between the Wiltshire towns of Marlborough and Hungerford, has been the property of one family—whether named Esturmy, Brudenell, or Bruce—since the latter part of the eleventh century. Perhaps the happiest period in this long family wardenship was between 1748 and 1814 when Lord Bruce, Thomas Bruce Brudenell, set out purposefully to shape the forest so that "utility and beauty should be harmoniously wedded." 1 He planted a grand avenue of trees leading to his mansion, Tottenham Park, designed by Lord Burlington, and he created a deer park where these animals—so destructive to young shoots and forest management—could be concentrated.

In this shaping and planting he had the assistance of Lancelot "Capability" Brown who suggested that the same aesthetic principles that governed the laying out of park and garden be applied to the estate as a whole. He worked out a strategy for linking coppices with oak plantings, lining forest trails with beech trees, and providing vistas with "proper objects" on which the eye might rest. The forest would be made part of the parkland. The scattered coppices, meadows, scrub, and heath that Brudenell inherited should be united, Brown advised, into "one great whole." 2

Attracted though he was by this vision of unity, Brudenell was not comfortable with the idea that the landowner and his seat should be focal points around which avenues and vistas were made to radiate. That would call attention to the landowner's capacity to command the estate and all its surrounds rather than to express his function as steward and conservator. Brudenell preferred the less assertive statement. He was determined to set his generation an example of the "improving landlord," one intent on demonstrating that responsible landlordship served the interests of a wider community. Consequently, he wished his extensive plantations to blur rather than accentuate the boundaries between "working" parts of the estate and parts set aside for enjoyment and display. Neither beauty nor utility should dictate which trees to plant or how to group, arrange, and manage them: the aim instead should be to paint a picture of gentle concord between the two principles. Paradoxically, notes Stephen Daniels, this determination, shared by many aristocrats of the period, to be discreet in the use of political iconography, "both softened the impression of property and, by composing the countryside as a whole as a picture, strengthened it." 3

When Thomas Bruce Brudenell died, wrote his descendant, the sixth marquess of Ailesbury, "the great planting impulse of the eighteenth century" perished with him. 4 But that is to suggest a linear development, when, in fact, tastes, iconography, as well as the planting urge fluctuated throughout the Victorian years and after. For example, uninhibited Brownian display of pomp and power had something of a resurgence when the second marquess, George Frederick Brudenell-Bruce, took over the wardenship of Savernake in 1856. This ambitious, vainglorious aristocrat had little interest in forest management. He was indifferent to the fact that no new planting of any consequence had taken place since 1814. What he did care about was prestige through conspicuous consumption. There was much rearranging of copses and vistas and setting aside of grass rides so that visitors could see the woods as a whole and be impressed. In carrying this out, George Frederick finally managed completely to do away with the distinction between park and forest. He ordered that the entire estate be fenced and palings be placed around individual trees. That way, the deer might roam freely with a minimum of damage. 5 Visitors were attracted by the reputation of the forest as a sylvan paradise and to the prospect of being, like the deer, free to walk for miles under great trees and along arboreal colonnades. 6 On display was the owner's pride and his ambitions to advance in the hierarchy of nobility.

Then in 1886 the second marquess's grandson inherited. Fate decided that he should demonstrate that the hereditary principle, which in theory and sometimes in practice builds links of responsibility between generations and also makes certain that those links are sometimes severed. To pay his gambling debts, the twenty-three-year-old Willie, openly acknowledged by the family to be "a notorious ne'er-do-well," 7 tried to break the entail and sell the great trees. "I'll make those damned squirrels jump further!" was his only memorable remark.

But, as it turned out, the squirrels were left in peace. An uncle managed to discourage a prospective buyer, Lord Iveagh, the brewer of Guinness, by entangling the sale in legal challenges. Shortly thereafter, the feckless Willie retired from the wardenship by drinking himself to death. It had been a near thing. By the time he expired in 1894, the family exchequer was much depleted and the forest along with it. 8

Good fortune then intervened and gave the estate two enthusiastic planters, determined, like the earlier Thomas Brudenell, to marry beauty to utility. The fifth marquess recognized that the woodlands needed to be made commercially viable. Included among the 778,000 trees he planted were a high proportion of softwoods, placed outside the forest's core. Too deeply imbued with tradition to contemplate industrialized forestry, he was, nevertheless, the first of his family to introduce a measure of systematic management. He planted quick-growing larch and spruce. On the other hand, he also let loose in the forest a herd of Highland cattle, thinking that these beasts would add a picturesque touch. 9

His successor in 1911, Chandos Bruce, the sixth marquess, did everything possible to carry on with this combination of systematic management and concern for amenity and symbolic representation. Eventually, however, he found the burden too heavy, what with increasing costs, Lloyd George's taxes on inherited wealth, and the impossibility of hiring enough labor during and after the First World War. In 1930 he approached the government Forestry Commission but drew back when he recognized that surrendering control would probably bring on an invasion by ranks of straight-backed conifers. Eight years later the commission became more open to the suggestion that recreational uses might be as legitimate as commercial ones and agreed to the special conditions the sixth marquess had stubbornly laid down. 10 As a result, after 800 years of wardenship, the family surrendered control and the public, because of Lord Ailesbury's dedication, gained a handsome amenity.

Immediately apparent in this account of Savernake's changing fortunes is the spirit of amateurism. That spirit had fashioned and preserved many ornaments like Savernake and had a part to play in forming a beautiful landscape, one where hilltop copses and lines of wooded hedgerows supplied contrast and definition. Throughout the century, however, a steady flow of criticism came from those who believed that the country had been forced to pay heavily for such embellishments. Forestry reformers believed that romanticism, sentimental attachment to trees as individuals, excessive concern for aesthetics, and a wasteful obsession with hunting had prevented the development of a national forest policy and had made Britain dangerously dependent on foreign suppliers. Worst of all, such irratio

Nineteenth-century Britain led the world in technological innovation and urbanization, and unprecedented population growth contributed as well to the "rash assault," to quote Wordsworth, on Victorian countrysides. Yet James Winter finds that the British environment was generally spared widespread ecological damage.

Drawing from a remarkable variety of sources and disciplines, Winter focuses on human intervention as it not only destroyed but also preserved the physical environment. Industrial blight could be contained, he says, because of Britain's capacity to import resources from elsewhere, the conservative effect of the estate system, and certain intrinsic limitations of steam engines. The rash assault was further blunted by traditional agricultural practices, preservation of forests, and a growing recreation industry that favored beloved landscapes. Winter's illumination of Victorian attitudes toward the exploitation of natural resources offers a valuable preamble to ongoing discussions of human intervention in the environment.

James Winter is Professor Emeritus of History at the University of British Columbia and author of London's Teeming Streets, 1830-1914 (1993).

"This book is both learned and readable, at once an environmental, economic, and technological history. Actually about the whole length and breadth of Britain, it is never so technical that a lay reader gets lost and never so accommodating that it flattens the complexities of his subjects."—Michael Dintenfass, author of The Decline of Industrial Britain 1870-1980

1. Innovation and Continuity
2. The Cultural Landscape
3. Lowland Fields
4. Upland Moors
5. Woods and Trees
6. Cutting New Channels
7. Holes
8. Heaps
9. The City in the Country
10. Greening the City
11. The Environment of Leisure
12. The Hungry Ocean