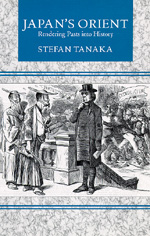 Stefan Tanaka examines how late nineteenth and early twentieth century Japanese historians created the equivalent of an "Orient" for their new nation state. He argues that the Japanese attempted to use a variety of pasts—Chinese, Indian, and proto-historic Japanese—to construct an identity that was both modern and Asian.

INTRODUCTION:
THE DISCOVERY OF HISTORY

PART ONE: FINDING EQUIVALENCE
1
From Kangaku to 1oyiishi: The Search for History
2
Toyoshi: The Convergence of East and West

EPILOGUE: THE RENOVATION OF THE PAST
WORKS CITED
INDEX