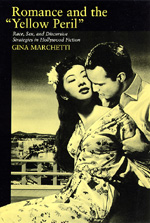 Romance and the Yellow Peril Race, Sex, and Discursive Strategies in Hollywood Fiction

Hollywood films about Asians and interracial sexuality are the focus of Gina Marchetti's provocative new work. While miscegenation might seem an unlikely theme for Hollywood, Marchetti shows how fantasy-dramas of interracial rape, lynching, tragic love, and model marriage are powerfully evident in American cinema.

The author begins with a discussion of D. W. Griffith's Broken Blossoms, then considers later films such as Shanghai Express, Madame Butterfly, and the recurring geisha movies. She also includes some fascinating "forgotten" films that have been overlooked by critics until now.

Marchetti brings the theoretical perspective of recent writing on race, ethnicity, and gender to her analyses of film and television and argues persuasively that these media help to perpetuate social and racial inequality in America. Noting how social norms and taboos have been simultaneously set and broken by Hollywood filmmakers, she discusses the "orientalist" tensions underlying the construction of American cultural identity. Her book will be certain to interest readers in film, Asian, women's, and cultural studies.

Gina Marchetti is Assistant Professor of Film at the University of Maryland.

Illustrations
Preface
1 Introduction
2 The Rape Fantasy: The Cheat and Broken Blossoms
3 The Threat of Captivity: The Bitter Tea of General Yen and Shanghai Express
4 Passport Seductions: Lady of the Tropics
5 The Scream of the Butterfly: Madame Butterfly, China Gate, and "The Lady from Yesterday"
6 White Knights in Hong Kong: Love Is a Many-Splendored Thing and The World of Suzie Wong
7 Tragic and Transcendent Love: Sayonara and The Crimson Kimono
8 Japanese War Brides: Domesticity and Assimilation
In Japanese War Bride and Bridge to the Sun
9 The Return of the Butterfly: The Geisha Masquerade In My Geisha and "An American Geisha"
10 Conclusion: The Postmodern Spectacle of Race and Romance In Year of the Dragon
Notes
Bibliography
Index