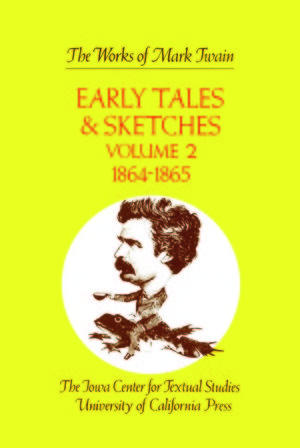 From the Introduction:
The second volume of this collection follows Clemens from his first days as a resident journalist in California, late in May 1864, through the end of his first full year as a California resident, 1865. In this twenty-month period he wrote most of his work for the San Francisco Golden Era, the Morning Call, the Dramatic Chronicle, and the Californian. He began to publish somewhat more regularly in eastern journals, like the New York Saturday Press and the Weekly Review, and toward the end of the period he started a long assignment as the daily correspondent from San Francisco to the Virginia City Territorial Enterprise. In November 1865 he published "Jim Smiley and His Jumping Frog" [no. 119] and by the beginning of 1866 the news of its success with eastern readers had begun to filter back to California. He was on the verge of national and international fame as a humorist.