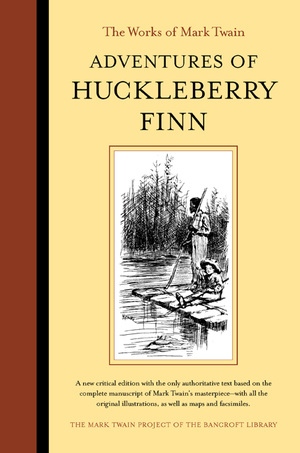 The text of this new scholarly edition of Adventures of Huckleberry Finn is the first ever to be based on Mark Twain's complete, original manuscript—including its first 665 pages, which had been lost for over a hundred years when they turned up in 1990 in a Los Angeles attic. The text has been thoroughly re-edited using this manuscript, restoring thousands of details of wording, spelling, and punctuation which had been corrupted by Mark Twain's typist, typesetters, and proofreaders. It includes all of the 174 first edition illustrations by Edward Windsor Kemble, which the author called "most rattling good."

The editorial matter is extraordinarily rich. A new introduction tells the story of how Mark Twain's book was written, edited, published, and received, and spells out in detail the effect of the newly discovered manuscript on the text. Included are revised and updated maps of the Mississippi River valley, explanatory notes, glossary, and several documentary appendixes such as Twain's literary working notes, facsimile manuscript pages, facsimile reproductions of the author's revisions for his public reading tours, and contemporary advertisements and announcements. Also included are a description of the manuscript and all texts used in preparing this edition and complete lists of the author's revisions. The acclaimed 2001 Mark Twain Library edition (Library edition books are intended for general readers) was drawn from this comprehensive new scholarly edition in the Works of Mark Twain series.

Victor Fischer and Lin Salamo are both members of the Mark Twain Project of The Bancroft Library at the University of California, Berkeley.

"This is the definitive critical edition of Huckleberry Finn you've been waiting for. Ingenious textual detective work rescues Twain at last from hundreds of careless errors by typists, typesetters and proofreaders. The fascinating explanatory notes help us decode allusions that were familiar to readers in Twain's time but are obscure today, while the reproduced manuscript pages let us compare for the first time first and final drafts of some of the book's most memorable passages. This splendid book belongs in every library, home, and literature classroom."—Shelley Fisher Fishkin, author of Lighting Out for the Territory: Reflections on Mark Twain and American Culture and Editor of The Oxford Mark Twain.

"Because of the lately recovered half of the manuscript we now have the genome filled in for Adventures of Huckleberry Finn, along with the Mississippi-wide expertise that shows us how to comprehend this edition. To borrow from one of the Connecticut Yankee's walking ads, 'All the Prime-Donne will use it.'"—Louis J. Budd, author of Our Mark Twain and Mark Twain: The Contemporary Reviews