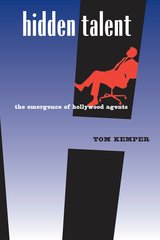 Katharine Hepburn, John Wayne, Lauren Bacall—behind each of these stars was a hidden force: the talent agent. In this first-ever history of Hollywood agents, Tom Kemper mines agency archives to present an insider's view on their tooth-and-claw rise to power during the studio era. It's a tale of ambitious characters, savvy calculation, muckraking, financial ruin, and ultimate triumph, and establishes the agent's vital role in the Hollywood business world. Existing studies characterize agents as a product of the 1950s, but Kemper revises the record to show how agents emerged from the primordial film industry during the late 1920s and carved themselves a permanent niche. Through case studies of key figures like Myron Selznick and Charles Feldman, we see that the agent's character and social relationships functioned within a business structure—a good reputation and powerful connections were his most precious assets. With wit and precision, Kemper locates Hollywood agents at the crossroads of talent and profit, and captures their central and enduring role in the burgeoning film industry.

Tom Kemper is Visiting Lecturer at the University of Southern California, and a teacher at the Crossroads School of Arts and Sciences in Los Angeles.

“Kemper’s work [is] both groundbreaking and valuable. . . . I learned something new in every chapter. Hidden Talent is a fascinating chronicle of the business side of Hollywood.”—Leonard Maltin, Movie Crazy

“Has there ever been a biographical film entirely about a Hollywood agent? Probably not. Still, some of the figures in Tom Kemper's new book would make lively subjects.”—Chronicle Of Higher Ed

“A significant contribution to the history of Hollywood agents. . . . An important new perspective on the dynamics of production in the studio era.”—James Lyons Screening The Past

“Kemper’s witty, engaging prose and skill as a storyteller make the book accessible to a wide audience.”—Eric Hoyt Senses Of Cinema

"This is an extremely valuable contribution to the history of Hollywood and draws on the moment when a form of disorganized, post-Fordist capitalism came to characterize the industry, thanks to agents and stars breaking away from studio power. A landmark volume."—Toby Miller, author of Global Hollywood 2


“The demeaned and derided figure of the Hollywood agent gets his rightful screen credit in Thomas Kemper's Hidden Talent, an absorbing history of the hustlers, middlemen, and deal-makers who greased the wheels of the star-making machinery in Hollywood's Golden Age. In Kemper's fascinating account, the agent comes off less as Budd Schulberg's Sammy Glick than F. Scott Fitzgerald's Monroe Stahr: a cagey player who apprehended 'the whole equation' of filmmaking—nurturing nobodies into superstars, nursing projects to completion, and, for better and worse, setting the pattern for the way Hollywood does business today. And all for just ten percent off the top.”—Thomas Doherty, author of Hollywood's Censor: Joseph I. Breen and the Production Code Administration

"Tom Kemper's Hidden Talent makes a valuable contribution to the history of the motion picture industry. At a time when studios were closely held entities, the representative class emerged on the scene with great energy, skill, and bravado. Kemper's well-considered discussion of Myron Selznick and Charles Feldman wisely foretells the rise of the modern full service agency. This is a mandatory text for any serious student or practitioner in the film industry."—Jeff Berg, Chairman, International Creative Management

1. City of Agents: The Power of Place
2. Revenge of the Agent: Myron Selznick
3. A Percentage of Power: Small Agents
4. Charisma and Contracts: Charles Feldman
5. Numbers and Niches: Boutique Agencies
6. Sealing the Deal: The Contract Industry
7. My Man Myron: Power and Persuasion
8. What Made Myron Run?: The Whole Equation
9. Tall in the Saddle: Agents in the Producer’s Chair
10. The Deal Factory: New Fortunes in the Forties
Epilogue. The Corporate Era: Changing Channels