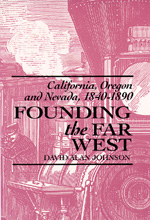 Founding the Far West is an ambitious and vividly written narrative of the early years of statehood and statesmanship in three pivotal western territories. Johnson offers a model example of a new approach to history that is transforming our ideas of how America moved west, one that breaks the mold of "regional" and "frontier" histories to show why Western history is also American history.

Johnson explores the conquest, immigration, and settlement of the first three states of the western region. He also investigates the building of local political customs, habits, and institutions, as well as the socioeconomic development of the region. While momentous changes marked the Far West in the later nineteenth century, distinctive local political cultures persisted. These were a legacy of the pre-Civil War conquest and settlement of the regions but no less a reflection of the struggles for political definition that took place during constitutional conventions in each of the three states.

At the center of the book are the men who wrote the original constitutions of these states and shaped distinctive political cultures out of the common materials of antebellum American culture. Founding the Far West maintains a focus on the individual experience of the constitution writers—on their motives and ambitions as pioneers, their ideological intentions as authors of constitutions, and the successes and failures, after statehood, of their attempts to give meaning to the constitutions they had produced.