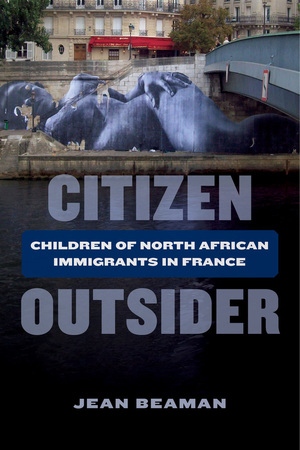 While portrayals of immigrants and their descendants in France and throughout Europe often center on burning cars and radical Islam, Citizen Outsider: Children of North African Immigrants in France paints a different picture. Through fieldwork and interviews in Paris and its banlieues, Jean Beaman examines middle-class and upwardly mobile children of Maghrébin, or North African immigrants. By showing how these individuals are denied cultural citizenship because of their North African origin, she puts to rest the notion of a French exceptionalism regarding cultural difference, race, and ethnicity and further centers race and ethnicity as crucial for understanding marginalization in French society.

This guest post is published as part of our Scholar-Activist series related to the American Sociological Association conference from August 11 – 14 in Philadelphia. #ASA18 #ScholarActivist By Jean Beaman, author of Citizen Outsider: Children …

Going to Southern Sociological Society conference this week from April 4- 7 in New Orleans? Make sure to attend the author meets critics sessions to learn more about books that discuss racial theory …

Jean Beaman is Assistant Professor of Sociology at University of California, Santa Barbara.

"Written in a straightforward and engaging style, ... ideal, not only for specialists of race and (im)migration in France and beyond, but also as a teaching tool for upper level undergraduate students."—Ethnic and Racial Studies

“Offers a critical examination of a so-called colorblind society. A solid addition to courses on race, immigration, citizenship, or French studies.”—Migration Studies Review

"Both the empirical evidence and the theoretical frameworks that Beaman employs make important contributions to political and scholarly debates over race and immigration in France."—City and Community

"Beaman offers a rich and stringent critique of the continued marginalization of French citizens deemed “outsiders” due
to their race or ethnicity. ... This book is an excellent case study of race and immigration in France, suitable for scholars of race and ethnicity, and particularly well-suited for senior undergraduate students."—American Journal of Sociology

"I highly recommend this monograph for classroom use in an upper-division undergraduate course in race-ethnicity or in a graduate-level seminar in race-ethnicity or stratification. I recommend this book to those who want a nuanced understanding of how immigration, ethnicity, race, and culture frame social inclusion for visible minorities in France today. Read this book cover to cover. Beaman delivers a sophisticated yet accessible comprehension of why the children of North African immigrants in France grow up to be citizen outsiders."—Social Forces

"A methodologically sound, illuminating text that contributes to the literature on both immigration and the formation of racial theories at the global level."—Teaching Sociology

"Citizen Outsider takes place in a new thread of research on multicultural France. It's a fantastic journey into the minority experience of socially upwardly mobile North Africans. It uncovers the French 'racial project' and contributes brilliantly to an ongoing conversation on racial formation in a formally colorblind society. It is worth reading to take stock on racial formation in France."—Patrick Simon, Institut National d’Etudes Démographiques (National Institute for Demographic Studies), coeditor of Fear, Anxiety, and National Identity: Immigration and Belonging in North America and Western Europe

"Jean Beaman's Citizen Outsider offers a trenchant analysis of the racial exclusions, indignities, and injustices experienced by French citizens of color. Distinguishing between formal and cultural citizenship, Beaman draws on extensive ethnographic evidence and interviews to substantiate the insight that physical presence falls significantly short of social belonging or acceptance. She traces the historical and material conditions underpinning the resulting racial tensions and political unsettlements. Citizen Outsider provides a compelling account of the social structures and expressions of racism in France today—and their individual and community resistances."—David Theo Goldberg, Director and Professor, University of California Humanities Research Institute, and author of Are We All Postracial Yet?

"Whites in France lie to themselves and the world by proclaiming that they do not have institutional racism in their nation. Relying on interviews with second-generation, middle-class North African immigrants (a group that should be presumably 'integrated' and thus happy), Professor Beaman shatters this myth and shows the deep salience of race in the country. Bravo to Professor Beaman for clearly documenting how 'racism without racists' operates in the French context!"—Eduardo Bonilla-Silva, president of American Sociological Association and author of Racism without Racists: Color-Blind Racism and the Persistence of Racial Inequality in America

"Citizen Outsider brilliantly illuminates the significance of ethnoracial origins in France, a society whose national identity denies their importance. This book is essential reading for anyone who wants to understand the role of immigration in the widening social cleavages on both sides of the Atlantic."—Richard Alba, coauthor of Strangers No More: Immigration and the Challenges of Integration in North America and Western Europe

"France's supposed colorblind Republican ideology has often led scholars to overlook or even ignore the complexities of race in France. Jean Beaman's work is an important contribution to the study of immigration and race in France, bringing the voices of second-generation North Africans into the debates around what it means to be French and what it means to be Maghrébin/Black at a time when the politics of immigration are creating volatile situations in the banlieus (suburbs) of France and fueling support for Far Right politicians. Beaman's contribution comes at a critical juncture in the study of immigration, race, and politics in Europe and should be read by students and scholars alike."—Terri E. Givens, Provost, Menlo College, and coauthor of Legislating Equality: The Politics of Antidiscrimination Policy in Europe

"Skillfully combining attention to microlevel interaction and to the broader social environment, Jean Beaman offers a rich and provocative analysis of the cultural marginalization experienced by children of North African immigrants in France. She convincingly shows how ethnicity continues to separate individuals who have attained middle-class status, and how educational and occupational attainment can still leave some communities at the margins of society. She reveals the subtle and less subtle legacies of racial and ethnic inequalities inherited from a history of colonialism. This is a major and innovative contribution to the study of citizenship and immigration, a must-read for anyone interested in the topic."—Mounira M. Charrad, author of States and Women’s Rights: The Making of Postcolonial Tunisia, Algeria, and Morocco

One beautiful part of this book is captured in the words of the people interviews because Jean Beaman largely supports her arguments with portraits and excerpts of interviews with those whom she calls ‘outside’ citizens, in reference to work conceptualizing the simultaneous dynamics of integration and social marginalization to explain the place of black minorities in American society … Despite trajectories that have allowed them to access higher education and positions in intermediate or managerial professions, the visibility of their social and cultural heritage and the representations associated with it in French society lead to discrimination which is more or less strong, coupled with a permanent questioning of their legitimacy to occupy positions of responsibility in the workplace … Through an analysis of identity experiences and discrimination of young adults of North African origin who grew up in France, Jean Beaman shows the duality, the complexity, and the situational nature of their belonging."—Anne-Laure Counilh, University of Poitiers

1. North African Origins in and of the French Republic
2. Growing up French? Education, Upward Mobility, and Connections across Generations
3. Marginalization and Middle-Class Blues: Race, Islam, the Workplace, and the Public Sphere
4. French Is, French Ain’t: Boundaries of French and Maghrébin Identities
5. Boundaries of Difference: Cultural Citizenship and Transnational Blackness
Conclusion: Sacrificed Children of the Republic?