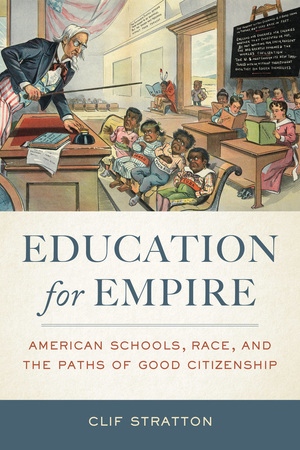 Education for Empire American Schools, Race, and the Paths of Good Citizenship

Using case studies from around the country, Clif Stratton deftly shows that public schooling and colonialism were intimately intertwined. This book reveals how students—from Asians in the U.S. West and Hawai‘i to blacks in the South, Mexicans in the Southwest, and Puerto Ricans in the Caribbean and New York City—grappled with the expectations of citizenship imposed by nationalist professionals at the helm of curriculum and policy. Students of American history, American studies, and the history of education will find Education for Empire an eminently valuable book.

by Clif Stratton, author of Education for Empire: American Schools, Race, and the Paths of Good Citizenship This guest post is part of a series published in conjunction with the meeting of …

African Americans and American Empire: Voices from the Archives

Clif Stratton is Clinical Assistant Professor of History and Assistant Director of the Roots of Contemporary Issues program at Washington State University. He is the 2014 recipient of the American Historical Association's Eugene Asher Distinguished Teaching Award.

“It has long been said that schools are laboratories of American democracy. In this powerful, convincing, and profoundly disturbing history, Clif Stratton obliterates this myth and reveals the frightening truth: that public education was meant, in an age defined by immigration, empire, and migration, to foster and maintain the privilege of a select few while ensuring that this privilege would remain beyond the reach of people of color, the poor, and colonial subjects. This should be required reading for anyone who cares about schooling, education, and justice.”—Matthew Pratt Guterl, author of Josephine Baker and the Rainbow Tribe

“At the turn of the twentieth century, the United States built an empire overseas and modern, bureaucratic school systems at home. Clif Stratton brings these two developments together, casting American education as an imperial project rather than simply a national one. He also shows how colonized Americans could resist the fate that educators prescribed for them in schools that became ideological battlegrounds over the meaning of America itself. The question of who gets to be ‘American’ continues into the present, of course. Anyone who wants to understand our conflicted answers will also want to read this bold and original book.”—Jonathan Zimmerman, New York University
“Education for Empire deepens the long-held analyses that racism at home justifies racism abroad and the conquest and colonization of nonwhites abroad reinforces white supremacy and nonwhite subordination at home. We also know education as a tool of control and liberation. Exceptional in this remarkable study is the particular role of school officials, textbook authors, and teachers at the local and national levels in promoting racial nationalism in US citizenship, immigration laws, and imperialism.”—Gary Y. Okihiro, Professor of International and Public Affairs, Columbia University


“This is a compelling study that illuminates the close alliance between empire building and public schooling. It reveals both the racist actions of those in seats of power and the acts of resistance taken by those in subordinated positions.”—Eileen H. Tamura, author of In Defense of Justice: Joseph Kurihara and the Japanese American Struggle for Equality
Read More >