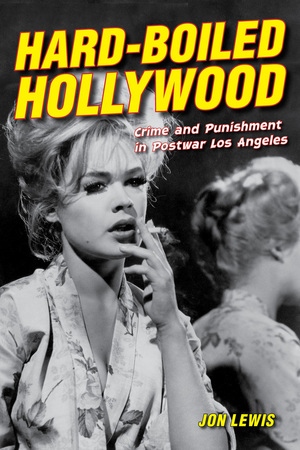 The tragic and mysterious circumstances surrounding the deaths of Elizabeth Short, or the Black Dahlia, and Marilyn Monroe ripped open Hollywood’s glitzy façade, exposing the city's ugly underbelly of corruption, crime, and murder. These two spectacular dead bodies, one found dumped and posed in a vacant lot in January 1947, the other found dead in her home in August 1962, bookend this new history of Hollywood. Short and Monroe are just two of the many left for dead after the collapse of the studio system, Hollywood’s awkward adolescence when the company town’s many competing subcultures—celebrities, moguls, mobsters, gossip mongers, industry wannabes, and desperate transients—came into frequent contact and conflict. Hard-Boiled Hollywood focuses on the lives lost at the crossroads between a dreamed-of Los Angeles and the real thing after the Second World War, where reality was anything but glamorous."

Jon Lewis is the Distinguished Professor of Film Studies and University Honors College Eminent Professor at Oregon State University. He has published eleven books, including Whom God Wishes to Destroy . . . : Francis Coppola and the New Hollywood and Hollywood v. Hard Core: How the Struggle over Censorship Saved the Modern Film Industry, is past editor of Cinema Journal, and served on the Executive Council of the Society for Cinema and Media Studies.

"Jon Lewis’s range as a film scholar is vast. . . . He leaves us with the conviction that the movie business is even more complicated and dangerous than we ever suspected, but never without great plots."—National Post

"On the way fantasy and reality interact in the films of the period, and on Hollywood’s essential darkness, this is a dense and compelling book."—Times Higher Education

"The kind of book that could sit comfortably on the shelf between James Ellroy and Mike Davis. . . . A breezy read that doesn’t talk down to the consumer – film buffs may know a lot about the subject, but younger readers will benefit."—On the Aisle

“You can tell a lot about a society by looking at its suicides. That off-handed comment from Emile Durkheim becomes the animating principle for Jon Lewis’s Hard-Boiled Holly­wood, which studies, as the surrealists would have it, the “exquisite corpses” of those left behind by the collapse of the studio machine. . . .  The writing in this book is, in the Surreal­ists’ terms, exquisite as well: a combination of penetrating analysis of the decline of the in­dustry and jaunty, laconic, and funny descrip­tion of the fish swimming in this infested sea.”—The Journal of American History

“The strength of Hard-Boiled Hollywood . . . is its detail. Lewis meticulously details each of the case studies he approaches, drawing from an impressive array of articles in trade journals and the popular press. Unearthing details that even those familiar with the era might have missed, Lewis affords us a portal into a Hollywood often overlooked.”—Velvet Light Trap

"This book is a fascinating on-location excursion down the mean streets of a metastasizing metropolis and the shuttered backlots of a sputtering studio system, an anthropological thick description of the gangsters, stars, hustlers, hookers, and hangers-on in the lonely place that is Hollywood."—Thomas Doherty, Professor of American Studies, Brandeis University

"Where previously Lewis focused most on top-level power plays and money grabs, he now trenchantly probes Hollywood's underworlds: grifters, gossip-mongers, and gangsters, loners and losers—bodies 'left by the side of the road.' A fascinating rewriting of Hollywood history, especially around production culture, including cultures of failure and despair." —Dana Polan, Cinema Studies, New York University

1. The Real Estate of Crime: The Black Dahlia Dumped by the Side of the Road
2. Mobsters and Movie Stars: Crime, Punishment, and Hollywood Celebrity
3. Hollywood Confi dential: Crime and Punishment in Postwar Los Angeles
4. Hollywood’s Last Lonely Places: The Sad, Short Stories of Barbara Payton and Marilyn Monroe