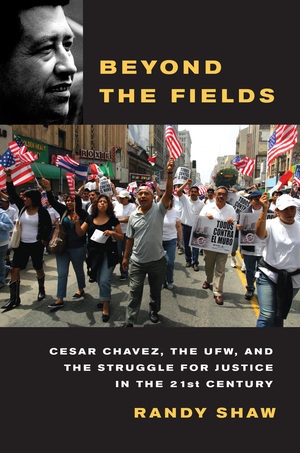 Beyond the Fields Cesar Chavez, the UFW, and the Struggle for Justice in the 21st Century

Cesar Chavez is the most prominent Latino in United States history books, and much has been written about Chavez and the United Farm Worker's heyday in the 1960s and '70s. But left untold has been their ongoing impact on 21st century social justice movements. Beyond the Fields unearths this legacy, and describes how Chavez and the UFW's imprint can be found in the modern reshaping of the American labor movement, the building of Latino political power, the transformation of Los Angeles and California politics, the fight for environmental justice, and the burgeoning national movement for immigrant rights. Many of the ideas, tactics, and strategies that Chavez and the UFW initiated or revived—including the boycott, the fast, clergy-labor partnerships and door-to-door voter outreach—are now so commonplace that their roots in the farmworkers' movement is forgotten.

This powerful book also describes how the UFW became the era's leading incubator of young activist talent, creating a generation of skilled alumni who went on to play critical roles in progressive campaigns. UFW volunteers and staff were dedicated to furthering economic justice, and many devoted their post-UFW lives working for social change. When Barack Obama adopted “Yes We Can” as his 2008 campaign theme, he confirmed that the spirit of “Si Se Puede” has never been stronger, and that it still provides the clearest roadmap for achieving greater social and economic justice in the United States.

by Randy Shaw, author of The Activist’s Handbook: Winning Social Change in the 21st Century Blacks Lives Matter (BLM) has become the broadest, most diverse social movement of our time. Having written The …

Randy Shaw is the Director of San Francisco's Tenderloin Housing Clinic, and is Editor of the online daily newspaper, BeyondChron.org. His previous books are The Activist's Handbook and Reclaiming America, both from UC Press.

“Beyond the Fields is a fascinating and useful combination of micro-history and field organizing manual . . . a seminal new work not only for historians and devotees of the Chicano Movement, and the UFW in particular, but for all those working for progressive causes. . . . The blend of personal and professional narratives with their historical context in Beyond the Fields has something to offer the neophyte and battle-weary alike.”—Susan Marie Green The Sixties

“Shaw’s book is the product of extensive research, and it’s invaluable for anyone interested in the evolution of unionization over the past forty years.”—T. A. Frank The Washington Monthly

“A useful resource for anyone interested in organizing, activism, or social movements -- whether because the Obama campaign has made these things freshly relevant or due to a longer-standing interest.”—Misslaura Daily Kos

“Shaw examines the enduring influence of the United Farm Workers’ model of grassroots organization, which he pointedly credits with the majority of labor’s successes since the 1960s and a wellspring of 21st-century movements for democratic rights.”—Publishers Weekly

“A thoughtful, informative, and provocative book . . . it recognizes and pays homage to the invaluable work and contributions of these intrepid reformers and activists, past and present.”—Juan R. García Journal Amer Ethnic History

“Invaluable for anyone interested in the evolution of unionization over the past forty years.”—The Washington Monthly

“Shaw does a stellar job of writing the history of the UFW and its key figures. . . . Shaw's timely look back at the farmworker movement reminds us what solidarity and sacrifice mean, offering both lessons learned and strategies that can still work for us.”—Victor Corral Colorlines: Race Culture Action

The UFW and the movements that grew from it were as significant as [this book claims. It gives] us a more serious and reflective account than perhaps was possible during the heady days of the 1960s and 1970s.—Labor Studies Journal

“Shaw’s book provides valuable history to guide activists in the battles to come, and is an inspiring read.”—Chris Tiedemann Talking Union Blog

“A useful resource for anyone interested in organizing, activism, or social movements -- whether because the Obama campaign has made these things freshly relevant or due to a longer-standing interest.”—Misslaura Vot3r Blog

"An important, stunningly original, and forcefully argued book."—Ruth Milkman, Director of the UCLA Institute of Industrial Relations and author of L.A. Story: Immigrant Workers and the Future of the U.S. Labor Movement

"The most powerful social earthquake in California history struck the farm town of Delano in 1965 and, as Randy Shaw explains in this fascinating, invaluable study, its aftershocks are still shaking workplaces and elections across America."—Mike Davis, author of In Praise of Barbarians

"Offers a powerful and moving account of how the UFW transformed people's lives, instilling a lifetime commitment to social justice. Shaw shows how the spirit, strategies, and tactics of the UFW in its heyday still provide workers, immigrants, faith-based activists and others seeking social justice with a roadmap to win local struggles and national campaigns. If you want to understand the roots of 'Si se Puede' (Yes, We Can), read this book."—Fred Ross, Jr, UFW community and labor organizer