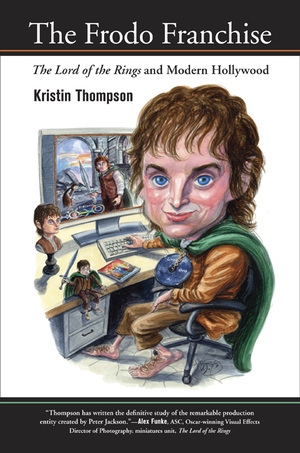 The Frodo Franchise The Lord of the Rings and Modern Hollywood

"Once in a lifetime." The phrase comes up over and over from the people who worked on Peter Jackson's The Lord of the Rings. The film's seventeen Oscars, record-setting earnings, huge fan base, and hundreds of ancillary products attest to its importance and to the fact that Rings is far more than a film. Its makers seized a crucial moment in Hollywood—the special effects digital revolution plus the rise of "infotainment" and the Internet—to satisfy the trilogy's fans while fostering a huge new international audience. The resulting franchise of franchises has earned billions of dollars to date with no end in sight. Kristin Thompson interviewed seventy-six people to examine the movie's scripting and design and the new technologies deployed to produce the films, video games, and DVDs. She demonstrates the impact Rings had on the companies that made it, on the fantasy genre, on New Zealand, and on independent cinema. In fast-paced, compulsively readable prose, she affirms Jackson's Rings as one the most important films ever made.

Kristin Thompson is an Honorary Fellow at the University of Wisconsin, Madison. Her many books include Film Art: An Introduction and Film History: An Introduction (both with David Bordwell) and Storytelling in the New Hollywood.

“A very warm and lively book rather than a musty academic treatise. . . . The Frodo Franchise is the best case study yet written about film as a commodity in the global marketplace. If you’re a fan of the movies, the book is a trove of fascinating information. And even if you’re skeptical about the films’ artistic accomplishments, Thompson shows why they remain historically important works.”—Stephen Prince Film Quarterly

“For any person interested in the role of franchise film making on modern Hollywood, The Frodo Franchise should be considered required reading.”—Terry Hobgood Film International

“A lively and quick read that should appeal to scholars and fans alike. . . . Thompson treats the material with an easy, personal, conversational tone that tells the epic story (complete with heroes, villains, obstacles, and rising action) of the epic film venture that is The Lord of the Rings. The Frodo Franchise is chock-full of information, interesting and at times even exciting to read, and ultimately satisfying.”—Tolkien Studies

“It is always more satisfying to follow the art than to follow the money, but in this comprehensive study you can do both.”—Richard Von Busack Metro Newspapers

“Thompson's painstaking journey through the complexities of development, preproduction, and distribution establishes a broad perspective on filmmaking. Taking that journey with her will give you insights into The Lord of the Rings that you will not find compiled and integrated so well anywhere else. Whether you are a film scholar, a student, or a Tolkien enthusiast, you will benefit from her efforts.”—Journal Of Popular Culture

"Reading these chapters has been an absolute pleasure. It’s all so complex but so succinct. Thompson has managed to do what so many others have failed to do . . . in chapter one, she has explained how all the rights to LOTR bounced around, and were finally sorted so Peter Jackson could make the movie. I’ve never understood the complexities of how that worked until now!"—Judy Alley, Merchandising Coordinator, The Lord of the Rings

"I must say that Thompson has written the definitive study of Peter Jackson’s work in creating this remarkable production entity."—Alex Funke, ASC, Oscar-winning Visual Effects Director of Photography, miniatures unit, The Lord of the Rings

"I had a wonderful time reading those chapters! There’s so much I don’t know about what went on—I am in awe of all the research Thompson has done. It is an extremely interesting read! There’s so much there that I’d forgotten and I always wished there was a permanent record of many things that happened. Thompson’s account of TORN’s beginnings and how it functioned gets it absolutely right—more than that, Thompson captures how it felt to us at the time. Nobody else has managed to get enough of an understanding to do that."—Erica Challis ("Tehanu"), co-founder of TheOneRing.net

PART ONE: THE FILM
1. Prudent Aggression
2. Not Your Father’s Tolkien
3. Handcrafting a Blockbuster

PART IV: THE LASTING POWER OF THE RINGS
9. Fantasy Come True
10. Right in Your Own Backyard