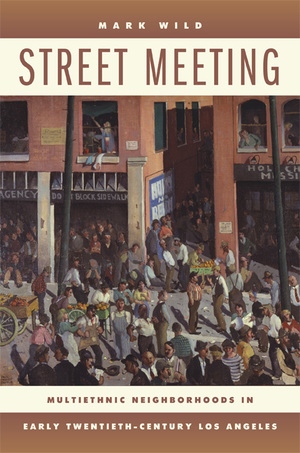 Immigrant neighborhoods of the early twentieth century have commonly been viewed as segregated, homogeneous slums isolated from the larger "American" city. But as Mark Wild demonstrates in this new study of Los Angeles, such districts often nurtured dynamic, diverse environments where residents interacted with individuals of other races and cultures. In fact, as his engaging account makes clear, between 1900 and 1940 such multiethnic areas mushroomed in Los Angeles. Street Meeting, enriched with oral histories, reminiscences, newspaper reports, and other sources, examines interactions among working-class Mexicans, Chinese, Japanese, Jews, Italians, African Americans, and others, reminding us that Los Angeles has been a multiethnic city since its birth. This study further argues that these ethnic interactions played a crucial role in the urban development of the United States during the early decades of the twentieth century.

"This insightful analysis of ethnoracial contact and social networks among immigrants and racial groups in the central districts of Los Angeles is the product of new thinking. Wildís conclusions are fresh and sound."—Tom Sitton, coeditor of Metropolis in the Making: Los Angeles in the 1920s

"This stimulating and exciting book is a work of synthesis that draws on dozens of previous theses and studies, as well as reminiscences, oral histories, testimony, and other first-person accounts. The result is an original and persuasive interpretation of the West's most important city."—Carl Abbott, author of The Metropolitan Frontier: Cities in the Modern American West

Introduction
1. The Familiarity of “Foreign Quarters”: The Central Los Angeles Populace in the Early Twentieth Century
2. Building the White Spot of America: The Corporate Reconstruction of Ethnoracial Los Angeles
3. The Church of All Nations and the Quest for “Indigenous Immigrant Communities”
4. “So Many Children at Once and So Many Kinds”: The World of Central City Children
5. Mixed Couples: Love, Sex, and Marriage across Ethnoracial Lines
6. Preaching to Mixed Crowds: Ethnoracial Coalitions and the Political Culture of Street Speaking
7. The Streets Run Red: The Communist Party and the Resurgence of Coalition Street Politics
Conclusion. From Central Neighborhood to Inner City: The Triumph of Corporate Liberal Urbanization