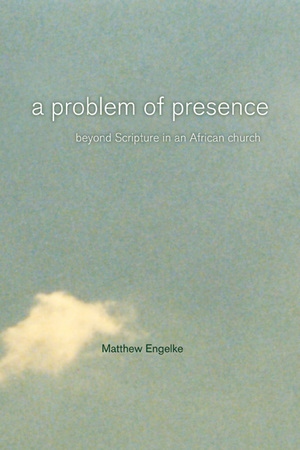 A Problem of Presence Beyond Scripture in an African Church

The Friday Masowe apostolics of Zimbabwe refer to themselves as “the Christians who don’t read the Bible.” They claim they do not need the Bible because they receive the Word of God “live and direct” from the Holy Spirit. In this insightful and sensitive historical ethnography, Matthew Engelke documents how this rejection of scripture speaks to longstanding concerns within Christianity over mediation and authority. The Bible, of course, has been a key medium through which Christians have recognized God’s presence. But the apostolics perceive scripture as an unnecessary, even dangerous, mediator. For them, the materiality of the Bible marks a distance from the divine and prohibits the realization of a live and direct faith.

Situating the Masowe case within a broad comparative framework, Engelke shows how their rejection of textual authority poses a problem of presence—which is to say, how the religious subject defines, and claims to construct, a relationship with the spiritual world through the semiotic potentials of language, actions, and objects. Written in a lively and accessible style, A Problem of Presence makes important contributions to the anthropology of Christianity, the history of religions in Africa, semiotics, and material culture studies.

Matthew Engelke is a lecturer in the Department of Anthropology at London School of Economics and Political Science.

“An insightful inquiry into a fascinating ethnographic case.”—Thomas Kirsch Journal Of The Royal Anthropological Inst

“A rich and rewarding book, A Problem of Presence contributes to a number of fields and brings them into new alignments.”—Journal Of Religion In Africa

“An important contribution, not just to scholarship on the African Church, but also to an emerging anthropology of Christianity.”—David Maxwell Books & Culture

“Highly useful for readers interested in African studies, religious studies, the anthropology of Christianity, the history of African churches, and social movements in Africa.”—Erica Bornstein H-Safrica

“Outstanding . . . The writing is humorous, vivid, and fluid.”—H-Net Reviews

“Matthew Engelke has crafted a fascinating, insightful, and sensitive study of the ways in which the Friday Masowe attempt to achieve religious transcendence. Drawing thoughtfully on the findings of other researchers across a wide spectrum of sociological and theological contexts, A Problem of Presence makes a valuable contribution to the comparative study of Christianity, and to the anthropology of religion in general.”—Webb Keane, author of Christian Moderns: Freedom and Fetish in the Mission Encounter

“In this impressive work, Engelke describes the Friday Masowe of Zimbabwe with real ethnographic sensitivity and adds wide resonance through authoritative and unpretentious theoretical elaboration. A Problem of Presence is a model of how to make an apparently oblique socio-cultural phenomenon illuminate very wide problems, without sacrificing ethnographic complexity and texture.”—James Clifford, author of The Predicament of Culture

"A beautifully written book. Engelke creates a new ethnographic field, that of biblical publicity, by following its ambitions in the high street, in politics, and in a Christian think-tank. He forces us—subtly but firmly—to rethink the location of religion in post-secular England and beyond."—Simon Coleman, University of Toronto

1. Up in Smoke: Humility, Humiliation, and the Christian Book
2. The Early Days of Johane Masowe
3. The Question of Leadership: The Friday Message after Johane
4. Mutemo in Three Portraits
5. Listening for the True Bible: Live and Direct Language, Part I
6. Singing and the Metaphysics of Sound: Live and Direct Language, Part II
7. The Substance of Healing