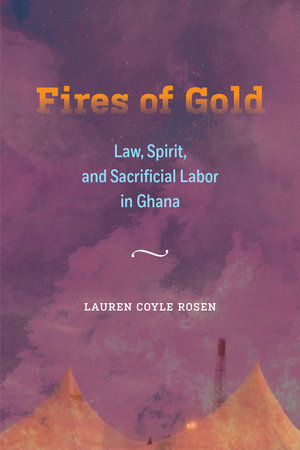 Fires of Gold Law, Spirit, and Sacrificial Labor in Ghana

Fires of Gold is a powerful ethnography of the often shrouded cultural, legal, political, and spiritual forces governing the gold mining industry in Ghana, one of Africa’s most celebrated democracies. Lauren Coyle Rosen argues that significant sources of power have arisen outside of the formal legal system to police, adjudicate, and navigate conflict in this theater of violence, destruction, and rebirth. These authorities, or shadow sovereigns, include the transnational mining company, collectivized artisanal miners, civil society advocacy groups, and significant religious figures and spiritual forces from African, Islamic, and Christian traditions. Often more salient than official bodies of government, the shadow sovereigns reveal a reconstitution of sovereign power—one that, in many ways, is generated by hidden dimensions of the legal system. Coyle Rosen also contends that spiritual forces are central in anchoring and animating shadow sovereigns as well as key forms of legal authority, economic value, and political contestation. This innovative book illuminates how the crucible of gold, itself governed by spirits, serves as a critical site for embodied struggles over the realignment of the classical philosophical triad: the city, the soul, and the sacred.

This post is part of our #RaisingOurVoices2020 blog series. Learn more at our American Anthropological Association virtual exhibit. For this year’s virtual AAA conference, series editor Kevin Lewis O’Neill joined us to talk …

Lauren Coyle Rosen is Assistant Professor of Anthropology at Princeton University. She works in legal and political anthropology, comparative spirituality, and critical theory. She is currently writing her second book, Law in Light: Truth, Vision, and Transnational African Spirituality.

"Lauren Coyle Rosen’s compelling ethnography of a Ghanaian gold-mining city centers on the value of gold.  But, as in those early modern mercantile encounters, it is also about the very logics of religion and ritual that place conflicting understandings of the value of exchange at the center of political struggles. Fires of Gold masterfully theorizes the dynamics of “liberalization,” which have occurred not just in Ghana but across the world since the late 1980s, as altered early modern ideas about the free market have reformed postcolonial welfare states."—Religiology

"Fires of Gold remains a dense, compelling and well-constructed ethnography that enriches the growing literature in the anthropology of resource extraction and uses an entry point on mining-related conflicts to bring together issues of labor struggles and existential precarity, spiritual controversies and religious change, political authority under constant contestation and redefinition, all ultimately shaping the uncertain future of a bustling but crisis-ridden one-company town."

"Coyle Rosen convincingly describes the flattening of sovereignty between a diversity of actors in Obuasi that parallels a conflictual verticalisation of spiritual authorities spurred by the growth in monotheist practice. Ghana’s praised success as a liberal democracy should be read in the context of the spiritual and pragmatic violence that reshapes the state in what the author describes as ‘a re-spiritualization, or re-enchantment, of sovereignty and political life.'"—Journal of Modern African Studies

"Fires of Gold demonstrates what cultural anthropology has to offer to the analysis of the contemporary—in Africa and elsewhere. In her account of a world where gold is valorized in terms that vacillate between the immanent and the transcendent, Lauren Coyle Rosen shows how conflicts between financial and industrial capitalism, and the improvisational forms of artisanal mining, are implicated in a profound reworking of both political economy and sovereignty. What emerges is both a critique of older political theoretical pieties and a dazzling description of a shadow world where new forms of power arise in the spectral bodies of the old, and where law in its many forms vanishes and reappears as a force of justice for those whom the state has otherwise failed."––Rosalind C. Morris, Professor of Anthropology, Columbia University

"A striking, novel contribution to sovereignty theory and to studies of African modernity in a Ghanaian gold mining town. Contemporary West Africa—with its land and labor imbroglios, its obsession with gold and capital accumulation, its forceful religiosities and spiritual encounters—shimmers with life and death in Coyle Rosen’s lively, smart reading. An urgent read for critical scholars of the continent today."––Charles Piot, author of Nostalgia for the Future: West Africa after the Cold War and The Fixer: Visa Lottery Chronicles

Introduction
1. Artisanal Miners and Sacrificial Laws
2. Spiritual Sovereigns in the Shadows
3. Pray for the Mine
4. Fallen Chiefs and Divine Violence
5. Effigies, Strikes, and Courts
Conclusion: Out of the Golden Twilight?