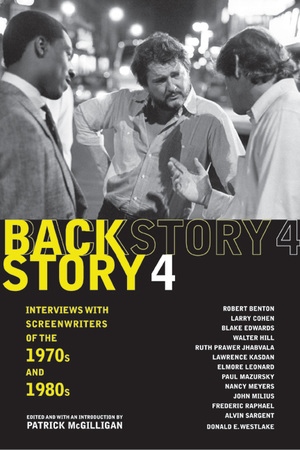 Backstory 4 Interviews with Screenwriters of the 1970s and 1980s

Continuing Patrick McGilligan's highly acclaimed series on Hollywood screenwriters, these engrossing, informative, provocative interviews give wonderfully detailed and personal stories from veteran screenwriters of the seventies and eighties focusing on their craft, their lives, and their profession. Backstory 4 is a riveting insider's look at how movies get made; a rich perspective on many of the great movies, directors, and actors of the seventies and eighties; and an articulate, forthright commentary on the art and the business of screenwriting.

The screenwriters interviewed for this volume include well-known Oscar winners as well as cult filmmakers, important writers who were also distinguished directors, and key practitioners of every commercial genre. These writers have worked with Steven Spielberg, Woody Allen, Peter Bogdanovich, George Lucas, Francis Ford Coppola, Robert Altman, Clint Eastwood, and other film giants of the so-called New Hollywood. The stories of their collaborations—some divine, some disastrous—provide some of the most fascinating material in this volume. They also discuss topics including how they got started writing screenplays, their working routines, their professional relationships, their influences, and the work of other major writers and directors.

Patrick McGilligan, who teaches film at Marquette University, edited the three previous Backstory volumes, all published by the University of California Press. He is author of the Edgar-nominated Alfred Hitchcock: A Life in Darkness and Light (2003), Clint: The Life and Legend (2002), and many other books about film, including George Cukor: A Double Life (1991) and Fritz Lang: The Nature of the Beast (1997), both New York Times Notable Books.

"Backstory 4 lives up to the high standards of the previous volumes, providing us with intimate, funny, insightful conversations with the highly articulate and film-literate screenwriters and writer-directors of many of the most memorable American films from the 1970s and 1980s, the era of the movie brats, the cult film, and the blockbuster. Each interview is a revelation. Both the interviewers and the subjects are great company. Editor Patrick McGilligan has done it again." —Matthew Bernstein, editor of Controlling Hollywood

Bibliographic Notes
About the Contributors
General Index
Index of Films, Plays, and Books 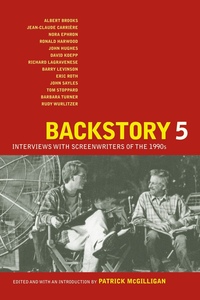