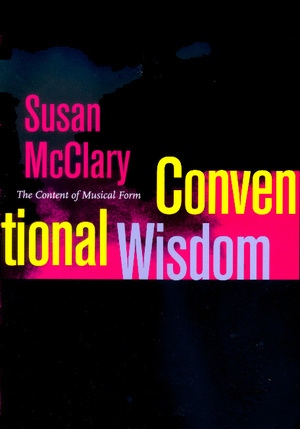 With her usual combination of erudition, innovation, and spirited prose, Susan McClary reexamines the concept of musical convention in this fast-moving and refreshingly accessible book. Exploring the ways that shared musical practices transmit social knowledge, Conventional Wisdom offers an account of our own cultural moment in terms of two dominant traditions: tonality and blues.McClary looks at musical history from new and unexpected angles and moves easily across a broad range of repertoires--the blues, eighteenth-century tonal music, late Beethoven, and rap. As one of the most influential trailblazers in contemporary musical understanding, McClary once again moves beyond the borders of the "purely musical" into the larger world of history and society, and beyond the idea of a socially stratified core canon toward a musical pluralism.

Those who know McClary only as a feminist writer will discover her many other sides, but not at the expense of gender issues, which are smoothly integrated into the general argument. In considering the need for a different way of telling the story of Western music, Conventional Wisdom bravely tackles big issues concerning classical, popular, and postmodern repertoires and their relations to the broader musical worlds that create and enjoy them.

Susan McClary is Professor of Musicology at the University of California, Los Angeles, and author of Feminine Endings: Music, Gender, and Sexuality (1991) and Georges Bizet: Carmen (1992).

"Conventional Wisdom is a contribution to musicology of the first order. The field will have to reckon with it for years to come, for it will become the point of departure for discussions not only on the foundation of classical tonality and the American blues, but also for its deconstruction of the borderlands of 'the purely musical."—José David Saldívar, author of Border Matters

"In Conventional Wisdom Susan McClary once again brings her unique blend of audacity and judiciousness to the project of rethinking the basis of musical history. Ranging nimbly from Vivaldi to the blues and beyond, McClary reanimates the tired (not to say conventional) concept of musical convention. She shows not only that 'purely musical' conventions are tools for doing cultural work, but also that they act as a kind of barometer for the cultural work that particular eras feel the need of doing. She advances recent debates on the social import of music in a spirit of dialogue without sacrificing anything in the way of cutting-edge thought. This is a scintillating and challenging book that will be read eagerly by specialists and nonspecialists alike. No one who cares about music can afford to miss it."—Lawrence Kramer, author of After the Lovedeath