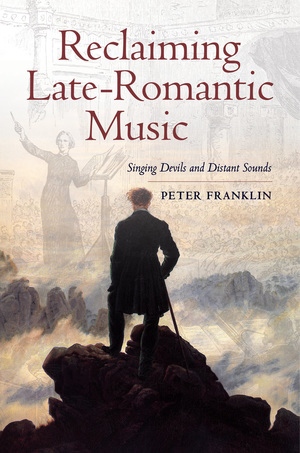 Why are some of the most beloved and frequently performed works of the late-romantic period—Mahler, Delius, Debussy, Sibelius, Puccini—regarded by many critics as perhaps not quite of the first rank? Why has modernist discourse continued to brand these works as overly sentimental and emotionally self-indulgent? Peter Franklin takes a close and even-handed look at how and why late-romantic symphonies and operas steered a complex course between modernism and mass culture in the period leading up to the Second World War. The style’s continuing popularity and its domination of the film music idiom (via work by composers such as Max Steiner, Erich Wolfgang Korngold, and their successors) bring late-romantic music to thousands of listeners who have never set foot in a concert hall. Reclaiming Late-Romantic Music sheds new light on these often unfairly disparaged works and explores the historical dimension of their continuing role in the contemporary sound world.

Peter Franklin is Professor of Music at the University of Oxford and a Fellow of St Catherine’s College. His books include Mahler: Symphony no.3 (1991), The Life of Mahler (1997), and Seeing Through Music: Gender and Modernism in Classic Hollywood Film Score (2011).

"A valuable new perspective to late-romantic repertoire . . . a 'must read.' "—Erinn Knyt Notes

"Franklin unravels the tangle of snobbery that has labeled Mahler a peddler of derivative kitsch and consigned Schreker to near complete obscurity. In doing so, he does more than just reclaim them – he invites us to rediscover the sheer pleasure of music and listen joyfully and unapologetically to the wild sounds of late Romantic music... Franklin gives us a tour of what we’ve been missing, including grand opera, with wonderful descriptions of key moments in performance history."—James H. Donelan European Romantic Review

“Peter Franklin brings a new perspective to a repertory long shunned and neglected in musicology… His revision honors listeners as it examines both their reactions and the arguments that led to the repertory’s marginalization by the Modernists.”
—Susan McClary, author of Desire and Pleasure in Seventeenth-Century Music

"Franklin is direct about his own love of late-romantic music; he sets off to explain, in part to us, in part to and for himself, why. In the process, he ranges widely into historical music criticism, the history of musicology, performance history, and social and cultural politics. He examines this music from the perspective of its own time, as well as ours, and along the way he astutely and in detail speaks to the music’s rhetorics: how and why it pleases. Not least, he meets head-on the implicit and explicit class consciousness informing discourses about musics of mass appeal. He pays particular attention to the fear, paranoia even, among modernists of many stripes throughout most of the last century that if audiences--mass audiences especially--liked such music then its aesthetic shortcomings were perforce the more certain. Franklin has sorted through impressive piles of print criticism, producing an enormously insightful archeology of this unfortunate ideology. The writing is fresh and focused; the insights are both original and important."
—Richard Leppert, author of The Sight of Sound: Music, Representation, and the History of the Body

1. Setting the Scene: Grandiose Symphonics and the Trouble with Art
2. Pessimism, Ecstasy, and Distant Voices: Listening to Late-Romanticism
3. Sunsets, Sunrises, and Decadent Oceanics
4. Making the World Weep (More Problems with Opera)
5. Late-Romanticism Meets Classical Music at the Movies
6. The Bitter Truth of Modernism: A Late-Romantic Story